Calvin Bruce Southall, age 67, of Sioux Lookout, Ontario, passed away on September 18, 2019, of complications from his cancer treatments, in ICU at the Thunder Bay Regional Health Centre.
Born December 3, 1951, son of the late John and Beatrice Southall, he was the first baby born in the old General Hospital.
He is survived by wife Beryl (nee Schroeder) and his three sons, David (Elizabeth), James (Kimberly), and Stephen (Katelyn) along with two precious grandsons, Tyler and Jackson.  He is also survived by his sister Deborah (Ken) Bittle and by ten nieces and nephews.
Calvin loved Sioux Lookout.  He never really wanted to live anywhere else.  He worked on the CN railway, as a conductor for 35 years, beginning this career at 18.
With an entrepreneurial spirit, he opened the first Home Hardware Store on Front Street in 1981.  With his out-going personality and interest in people, he displayed a wonderful knack for solving other people’s dilemmas, something he much preferred to tedious office work.
The Garden Centre was a source of joy and pleasure.  He started this enterprise with his young sons as helpers, and ten years later he ended with teenagers.  Sioux Lookouters always knew when spring arrived because they could see the Garden Centre going up on the Forest Inn parking lot.
Calvin’s faith was important to him and he was deeply committed to his church. He served as a committed trustee, a volunteer in children and youth programs, and was a central figure in the expansion of the church facility in the early 90’s. As in many other aspects of his life, his acts of service and generosity were done behind the scenes, outside of the spotlight.
Calvin retired early from the CN but was not one to sit on the dock indefinitely.  He had been interested in municipal politics for some time, watching from the sidelines.  In 2010, he was first elected to the Sioux Lookout town council.  He served two full terms and was serving his third. He had a passion for the success of Sioux Lookout and a vision for change.
Calvin loved to drive; cars, trucks, snow machines, boats and buses. The camaraderie of the Iron Range bus-shack drivers, and the joy of watching his young bus riders grow,  gave him a reason to get up every morning.  He was always available to drive teenagers to youth events and hockey tournaments.
Calvin loved design and construction.  Most of his architectural drawings could be found on restaurant napkins and the backs of placemats.
Finally, Calvin loved taking his family to Mexico.  The sun, the sand and the sea were a nice contrast to Sioux Lookout’s cold winters.
Calvin will be deeply missed by his family and friends and all who knew him.
A private interment was held at Northway Cemetery, at 1:00 pm on September 24, 2019. A Memorial Service followed at 2:00 p.m. at the Sioux Lookout Recreation Centre Gym with Tom Castor officiating.
Memorial contributions may be made in his honour to Clear and Simple Media through the Sioux Lookout Funeral Home, Box 1449, Sioux Lookout Ontario P8T 1B9. 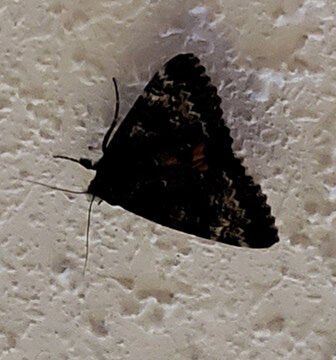 Dick's Hideaway: Wake up and smell the coffee

This guy joined me in the lazy day kitchen to perk up a pot of Folgers. As the steam rose I happened to look up... and there he was, hanging onto the ceiling above the stove as if he belonged there.