It is with sadness that we say goodbye to our father, James Henry Brannan, who died peacefully in his home on February 24, 2020.  Jim was born May 19, 1937 in Sioux Lookout, Ontario to Percy and Irene (nee Maloney)Brannan.  Jim grew up in Sioux Lookout and later moved to Alcona, where he met his wife Thelma Tennant and lived there until the age of 82.

Jim enlisted in the Royal Canadian Airforce in 1956 and spent three years receiving training in electronics.  After leaving the Airforce he opened a TV repair shop during the day and worked at the Mayfair Theatre as the projectionist during the evening.   He then worked for both Falcon Bridge and Abitibi gold/silver mines for the remainder of his career.  Jim was a mechanical wiz and loved to work with his hands.  In his retirement years he spent many hours tinkering in his shop, working on small and large motors and woodworking projects.  He liked the peace and quiet of living in nature, surrounded by trees, plants, animals and flowers.  He especially liked to grow orchids and amaryllis, which bloomed in many colours. He loved photography and often showed his latest pictures of wildlife to his friends and family.  He played solitaire ever morning, liked reading a good book or playing sudoku.  He enjoyed fishing, boating and mowing his giant lawn on his riding mower.  He had a bit of a sweet tooth and never turned down a piece of Aunt Irene’s chocolate cake or any chocolate for that matter.  He was also known to never turned down a good feed of pickerel, especially if it was already cleaned and cooked for him.

As per Jim’s request there will be no formal funeral service.  A small tea was held at his home on Sunday March 1st with family and close friends. He was a no fuss, no muss kind of guy, who liked to keep things simple and quiet and we are honoring his wishes.  If friends so desire, donations may be made to the Heart and Stroke foundation or to the Children’s Wish Foundation through the Sioux Lookout funeral home. 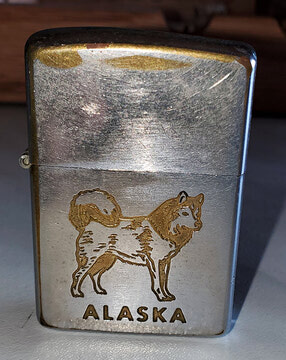 My friend Omar at Ramsey Smoke Shop sold me the torch lighter insert for a Zippo lighter. When I got home this week I dug out my old Zippo from a box in the basement.