Gone But Not Forgotten ~ My Danis

In loving memory of my beloved daughter Mary Alyson Roundhead.
She leaves behind her two precious children, Payton and Eric Fisher; her brother Donovan Roundhead and Desmond Winter, and Titus Brown and one sister Rainey Carpenter; her mother Wilma Carpenter and step-father Roy Carpenter. Also numerous aunts, uncles, nieces, nephews and cousins.
Predeceased by her sister Destiny Carpenter, her brother Jason Winter, her father Barry Frogg, grandparents Henry and Mary Frogg, her kokum Jessie Roundhead and shoomis Simon Rooster.
Mary was born and raised in Sioux Lookout and she resided in Thunder Bay with her two children.
It seems like it was yesterday that I spoke with my daughter Mary.  No words can express how I felt the day I was told that my daughter had passed on. Even to this day, it’s still hard to believe she is gone. I have to believe that she is at peace and no longer in pain, no more hurt, no more sorrow above all no more tears.
My girl, I miss you so much, the tears flow freely. If only I had that one last hug, to see your awesome smile and above all to hear your laughter. For your laughter was one of your traits, you can be heard from across the room or at the opposite side of the store when out shopping.
Mary, how she was looking forward to a change in her life. She had high hopes and planned to complete her schooling and to better herself.
Mary was very protective of her two children, Payton and Eric. When I look at my grandchildren I see you Mary, in their eyes, in their smiles and hear your voice in their laugh. Mary always had their backs, she would stand up for them when they were not being treated right. She always made sure that their needs were looked after before her own.
Mary may have left us, but she is not forgotten. For you, family, friends and that special love one; we each have our own memory, it could be a song, a phrase or crazy antics or let’s not forget her moments. Mary was there for her friends, at times she allowed friends to stay at her place if only for the night or a few days.
As a young girl she had dreams like everyone else. She became a mother way too young but that is what she wanted. For she had found her love, Blair Fisher. They had two children together, and she loved them. She was the backbone in the family. Although they parted ways, their friendship flourished, for they kept in touch with each other. She even allowed him to stay at the house for a short time, to help him out when he needed that help. That’s how Mary was helpful and kind to others especially when a friend needed that help.
Mary was the eldest sister, and she sure lived up to that – for she was there for Donovan and Rainey. It seemed they turned to her for help, for that listening ear and being that go to person. Although at times they could be obnoxious and a pain in the, you know where and as her door was always opened for them. For she loved them unconditionally.
Now Mary as we may know could be very clumsy and walks into things, but yet graceful. At times you can tell she walked into the wall or bump into something, for she would laugh at herself. Later on when she found a bruise, she would say “how did I get that”, and later on knew how she got that bruise.
Mary had competed in some figuring skating when she was younger. She even told some friends that she figure skated. Know you can hear and see the “why right” for they couldn’t picture her being a skater. A friend of hers asked me “You mean, Mary skated” I would reply “Yes, she was a figure skater back at home”. Now the disbelief in their eyes and the shaking of their heads “How can that be, when she is so accident prone”. All I heard was laughter from Mary “see told you I skated”.
Mary was organized. Things had to be done a certain way. She even had a schedule for the kids, as Eric would leave early by taxi to go to school, and then get Payton ready to walk to school with her friends. She at times was scared that Payton would have to walk alone, but Payton had friends to walk with.
Mary also had an awesome neighbor Vanessa and Sheldon. They both watched out for each other. She would ask her neighbor for something if she ran out, but always returned the next day or when she could. This neighbor always helped her by making sure her side of the driveway was shoveled even though she had no vehicle. Mary and her neighbor got along.
There is a poem that I would like to share with you all. Mary wrote this poem while she was at treatment.

Although it has been a year, it is time that the Roundhead family to express their sincere thanks and gratitude shown to our family during our time of loss of a daughter, sister, and a friend. She is dearly missed by all. So we the family would like to say thank you to the following, should we miss your name, please know that you are in our thoughts. For without you all there for us, we would have been surely lost. No words alone can say thank you enough. Even to this day, you are there for the family. Know that our family is with you also. Help came in many forms such hotel rooms, food and storage unit and most importantly the countless hugs and words of encouragement.
So thanks to my sister Marie Roundhead and my cousin Marte Benson for being there right at the beginning, for you two were my strength when I needed a shoulder; to the Pallbearers: Donovan Roundhead, Titus Brown, Blair Fisher, Chase Williams, Jeffery Roundhead, Desmond Roundhead, Jimmy Roundhead, Elijah Boshkaykin, William Mawakeesic, Honorary Pallbearers: Joe Roundhead, Randi Roundhead, Katie Trout, Rainey Carpenter, Marie Roundhead, Leanna Trout and Jesilyn Daniels.
Also thanks to Chief David Masakeyash of Mishkeegogamang First Nation, Chief Annemarie Beardy of Wawakapewin First Nation, Gull Bay First Nation, Lac Seul First Nation, Connie Gray-Mckay and her staff,  Kiera of Dilico Child & Familiy Services, Nishnawbe-Aski Legal Services Corporation, to Pastor Mark Barret of New Life Assembly,  Sioux Lookout Funeral Home; Property Manager of Thunder Bay Housing for giving us time to clear out of the unit, the Nishnawbe-Gamik Friendship Centre for use of the hall for the reception; and the countless cooks that prepared the food for the reception and a special thanks to my late sister-in-law Donna Roundhead.
Meeg-Wetch from our family 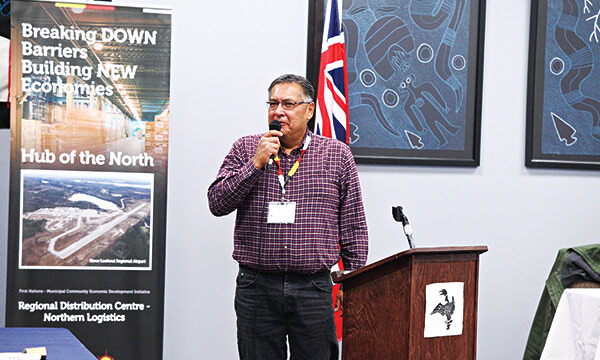