On Monday, September 20, Doug Lawrance, Mayor of the Municipality of Sioux Lookout, released a Proclamation in recognition of Rail Safety Week.

In the proclamation Mayor Lawrance states, in part, “Whereas it is in the public’s interest to raise citizens’ awareness of the dangers of ignoring safety warnings at level crossing and trespassing on rail property to reduce avoidable deaths, injuries, and damage caused by incidents involving trains and citizens; and whereas The Municipality of Sioux Lookout supports Operation Lifesaver’s ongoing efforts to save lives and prevent injuries;….Now therefore I, Doug Lawrance, Mayor of the Municipality of Sioux Lookout, do hereby proclaim September 20 to September 26, 2021 as Public - Rail Safety Week in Sioux Lookout.”

Mayor Lawrance added, “Rail Safety is important across our country, including Sioux Lookout. Given that the CN mainline bisects our community and given that we have witnessed the tragic reality of human-train accidents, it is tremendously important to highlight the importance of rail safety.” 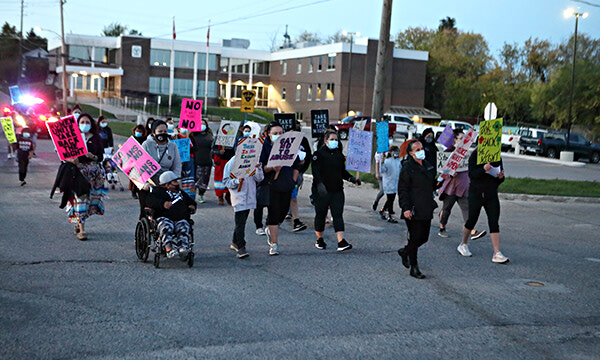 Approximately 35 people took to the street last Thursday evening (Sept. 23) in support of everyone s right to be safe and live free from violence and abuse in Sioux Lookout...