Sixty-eight participants took part in this year’s Men’s Blueberry Open golf tournament, which ran from August 8 to 9 at the Sioux Lookout Golf and Curling Club.
Veteran golfer Dwight Hildebrand, who recently shot his sixth hole-in-one during the Men’s Twilight on July 15, said this year’s tournament was great.
“Small tournament, but it was good. The staff up here did a phenomenal job. The course is great! The guys from out of town really enjoyed it. I’ve done this for years and years. I used to run it myself. They did a great job.”
This was event champ Matt Gain’s sixth time winning the tournament.
Over the two days the tournament rain, Gain shot 142 over 36 holes.
“I played really well yesterday and got a lead. Today was a little bit more of a grind. Made some good pars, scrambled pretty well, but I knew that I was in good shape,” he said.
Gain said the course is in great shape this year and credits greenkeeper Kyle Durante. “Every time I see him I’m thanking him for the work he’s doing. I really feel like we have one of the nicest courses in Northwestern Ontario.”
Gain said he feels fortunate the event was able to proceed this year during the COVID-19 pandemic, “We had to do things a little bit differently this year, but to see the same faces out here, it’s fantastic that we were able to have the tournament. It makes me really happy to be involved with this and everybody did a great job.”
Coordinator Alyssa Rice said there was a good turnout for the event given the circumstances, adding everything ran relatively smoothly.
“Just a big thank you to all the sponsors that we got. I want everyone to know how appreciative we have been of everyone’s help,” she said.
“We have noticed here at the club that a lot more people are golfing because it’s something that you can do while social distancing. We sold, I believe, 128 memberships this year, which is really, really good,” she concluded. 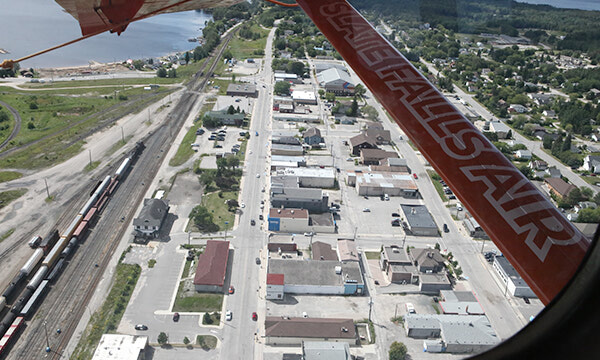 It was an opportunity to get a bird s eye view of the community.
Slate Falls Airways floatplane rides were another returning event to the 2020 Blueberry Festival.