Despite a fairly wet fall water levels remain lower than normal on our area lakes. While September saw higher than normal rainfall amounts in our area (142.6 mm, compared to a normal amount of 91 mm, according to Environment Canada), and a much more typical October (51.9 mm compared to a normal of 52.3), the long dry spells over the summer are still having repercussions on area water levels.

Matt DeWolfe, Executive Engineer at Lake of the Woods Control Board (LWCB), explained, “Pretty much all year there’s been drought across the watershed, it’s just the category of drought that has varied. It’s gone from exceptional drought, which is one of the most severe, in some areas, to just severe. That’s an actual descriptor used by the Canadian Drought Monitor and the U.S. Drought Monitor. All across the basin right now we are in a severe drought condition.”

Those dry conditions mean LWCB has had to conserve water on Lake of the Woods and Lac Seul in order to ensure a steady flow over the winter moths, when energy demands typically rise.

DeWolfe continued “Due to those conditions the flows going out of Lac Seul and Lake of the Woods has been very low. All through the summer and the fall we’ve been conserving water in storage to be able to provide the rives with consistent flows for the winter period. That process is starting to get underway. Over the course of this week and next week, those flows are increasing out of those lakes to provide key flow requirements down the English River and the Winnipeg River for power for the winter when heating demands are much higher.”

“The dams at the outlet of Lac Seul and Ear Falls are the main control for Lac Seul and that has an effect on water levels right up until the rapids at Pelican Lake, Savant Lake, and upstream. Those rapids aren’t really under the influence of the board but the water levels there are in keeping with the levels in the rest of the watershed, in the low end, we’re talking Abram and Minnitaki, those are all relatively low for this time of year as are Pelican and Botsford lakes.

“They had a bit of a pick-up during the fall with the additional precipitation, so they are just low of the normal range for this time of year. Not exceptionally low right now but definitely lower than you would typically see at the end of the fall.”

Last year’s lower than normal snowfall amounts did little to replenish the area watershed, but DeWolfe expressed hope that as we continue in a La Nina weather pattern this winter, we will have more precipitation. La Nina weather patterns usually bring cooler, wetter weather conditions across the prairies and into Northwestern Ontario (as opposed to El Nino which typically favours warmer, drier conditions) but last year that didn’t seem to happen.  A more detailed description of La Nina weather systems and how they affect Canadian climate can be found at the Government of Canada’s Environment and Climate Change website, located at https://bit.ly/3FXHbpM.

DeWolfe continued, “We are hoping to see a more substantial snow pack this winter. Last year was near record low in terms of the snow that was there at the start of the spring melt so that really laid the foundation for the very dry conditions all summer. We also didn’t get much rainfall. In terms of larger climate systems, we are in a similar position (this year) to where we were last year with the La Nina category. We are currently in a La Nina situation, when we typically do see more precipitation in the basin, which tend to give stronger flows in the spring. Last year was certainly an exception to that and may be again this year, we’ll just have to wait and see how the snow develops.”

DeWolfe finished by giving a few statistics to put things into perspective, stating, “Based on the board’s record of flows over the years, this year ranks 91st out of 105 years in terms of total flow entering Lac Seul. We call that the fourth percentile. That’s not he lowest ever, but it is very low, the lowest in the last 35-year period. In terms of precipitation, things are very similar, as it’s 35th out of the last 36 years, and in terms of total rainfall in the Lac Seul watershed its 103rd out of 108 years of records.” 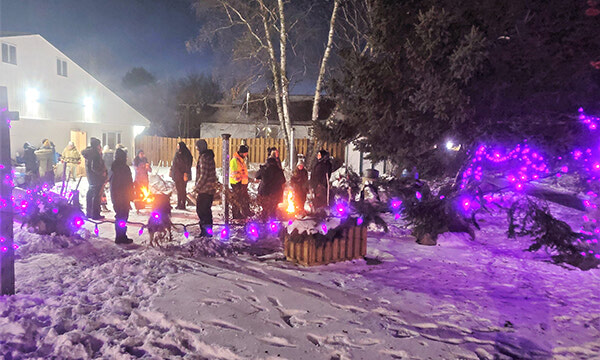 Thursday November 25 saw several Sioux Lookout organizations mark the International Day for the Elimination of Violence against Women, with the Shine the Light on Woman Abuse event at St. Andrew s United Church...