Love of Paws campaign wraps up

Sioux Lookout residents had the chance to honour and remember animals during Sioux Looks Out for Paws’ annual Love of Paws campaign. Rescue representative Joan Dykes explained that the campaign, which ran from Feb. 9 to 14, is something they’ve been doing in Sioux Lookout for quite some time.

Hearts were available at Fresh Market Foods and The Bark Barn. When asked about the businesses allowing them to set up their campaign, Dykes had nothing but good things to say.

“Fresh Market has always been very good to us, and happily provides us space every year to do this campaign. Bark Barn, who are amazing people, have been very, very supportive of the rescue agency and they were also selling hearts in their store,” she said.

Dykes also shared that the campaign is a good opportunity to give Sioux Looks Out for Paws more exposure to the community, who always seem to step up and provide help whenever and wherever need be.

“We’ll accept anything from 25 cents and up. I think it’s a good promotion as well for the organization itself. People will stop to chat and ask us what we’re doing, how we’re doing and that kind of thing. It’s a chance to meet volunteers as well as discuss the efforts of the rescue organization,” she said.

“Sioux Lookout itself, as a community, is a phenomenally supportive community for everything. We have, I believe, the best volunteers you could ever find. We have such a dedicated group of people,” she concluded.

To stay up to date on campaigns and animals at Sioux Looks Out for Paws, check out the Sioux Lookout Rescue Facebook page @siouxlookoutrescue. 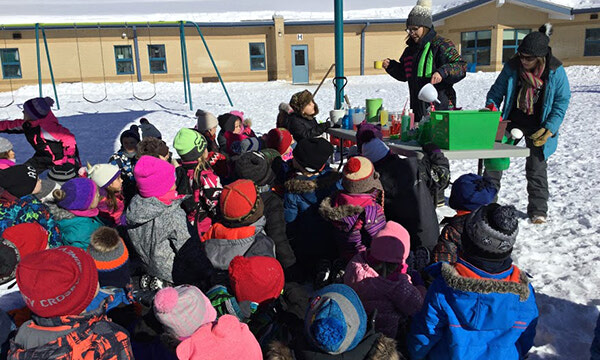 School News: Fun in the snow at Sacred Heart School!

Children love to explore outdoors throughout the school year. Over at Sacred Heart School, the large playground and proximity to Cedar Bay trails provide endless opportunities for the Kindergarten students to experiment, observe, and discover new...