Hudson based archaeological researcher Brad Hyslop has been conducting extensive research on Lac Seul’s shorelines and interiors for 30 years.

In 2018 he went back to school to accomplish a long-time goal of his, to finish his university degree. He recently realized that dream, completing his studies on May 19 and not only graduating, but earning two prestigious awards.

“One of the things on my bucket list was to finish my university degree. So, after being retired for a couple of years, I talked it over with my wife and decided that I wanted to go to Lakehead University to finish off my university degree, and decided to do that in anthropology, which is the program that archaeology is under at Lakehead,” said Hyslop. He added, “Going back to school when you are older was difficult, so it was a real sense of accomplishment to have graduated. You know, it was on my bucket list, I set out to do it, and it was achieved. So, I felt good.”

Graduating with a Bachelor of Arts with a major in anthropology, Hyslop was also recognized for his academic excellence with two awards, The Chancellor’s Medal and The Dean’s Medal for the Faculty of Science and Environmental Studies. “I wasn’t expecting the medals. I just tried to do the best I can,” said Hyslop, adding, “being a recipient of two awards, is just icing on the cake.”

Hyslop began searching for, and documenting, artifacts on Lac Seul in 1991, before going back to school in 2018 to further his knowledge. “A lot of people go get a university degree, and then they go and do archaeology. I did it the other way; I got the credentials from 30 years of fieldwork…and then went back and reinforced it with the academic credentials. Going back to university after you’re 55, it was a lot harder than I thought it was going to be. And I think part of that was…that I wanted nothing less than an A (80% +). I didn’t just want to get a pass,” said Hyslop. He shared that he was enrolled part-time for three years, taking the time to focus and enjoy his study, rather than rushing through it.

Throughout his work in the field of archaeology, Hyslop said that he has found and documented more than 200 sites on Lac Seul’s shoreline, which extends for about 4800 km. He shared that his research has taken him to all regions of Lac Seul. Hyslop added, “Although some research has been done on the lake, I think it’s fair to say that for the most part, even with my work, that Lac Seul in itself remains largely un-searched, with huge potential.”

Hyslop said, “The geographical positioning of Lac Seul has meant that it’s a convenient transportation hub that has existed for thousands of years. I mean, before we had airplanes and cars, travel was all by water, and it was interconnected…People canoed and portaged efficiently through the landscape via the lakes and rivers of this region.”

Starting out with a focus on the eroded shorelines, Hyslop said that he now also researches within Lac Seul’s forested interiors, which requires more intensive and detailed work. He shared that even after being raised beside Lac Seul, he never tried looking for artifacts, but when he did, he “found stuff right away.” Hyslop said, “I’ve always been a history buff. But, I didn’t realize that we had such a rich cultural heritage in the area until I was in my late 20s.” He added, “I didn’t really have, when I was younger, the concept that history stretched that far back into time.”

Hyslop has discovered artifacts that provide evidence of civilization in the Lac Seul area from over 8000 years ago. He recovers and researches stone and broken pottery artifacts. With expertise and a passion in archaeology for Indigenous pre-contact pottery, Hyslop continues his search, aspiring to find all the puzzle pieces to his Holy Grail, an intact clay pot, a complete vessel. He explained that living in the boreal forest, not a lot of organic material artifacts, such as wood, are able to survive due to the acidic nature of the soil.

“Through some of my research, it’s making people aware of the fact that there was a rich and vibrant cultural history that extended back into time thousands of years in this area,” he said.

“My research interest encompass archaeology conducted in eastern Manitoba, northern Minnesota and northwestern Ontario, but since all of my fieldwork has been conducted on Lac Seul, my work has mainly been conducted within the traditional territory of Lac Seul First Nation (outside of the reserve boundaries),” shared Hyslop. He added that he has signed a Memorandum of Understanding (MOU) with Lac Seul First Nations, dealing with his archaeological activities within their traditional territory, maintaining a good relationship regarding his research activities.

Hyslop has surveyed the shoreline and dug test pits in the forest interior in the course of his archeological research. “Basically, the test pit is digging into the un-eroded component of the forest, versus walking the eroded shoreline. And the eroded shoreline artifacts are either exposed or buried within the sands or the soils, that with the test pitting you are actually locating artifacts within the context of where they are deposited. So, artifact recoveries are a little more concentrated and less scattered, they are not being subjected to the forces of waves and erosion.”

Hyslop shared that the shoreline work depends on the precipitation levels of the area, with a dryer season resulting in lower water levels potentially exposing more artifacts. He added that he looks forward to a few digging projects in the upcoming weeks to acquire more data to move forward with his research.

Hyslop said that attending Lakehead University has further strengthened his relationship with the institution, which provides him with tools and tests to help research his findings. He added that pursuing this program helped him think in a broader context.

Hyslop said that with help from his supervisor, he was able to complete the majority of his work on a research paper called the Minontoba Composite that he has been developing since 2012. The paper is about a proposed revision to the Late Woodland taxonomic system to account for the high degree of decorative variation that occurs on pottery from the Late Woodland period in northwestern Ontario/southeastern Manitoba regions. Hyslop is currently working on revisions and final edits, with hopes to have the paper published later this year.

Hyslop thanked his wife and mother for their support throughout his journey. He will be attending his convocation ceremony on June 8. 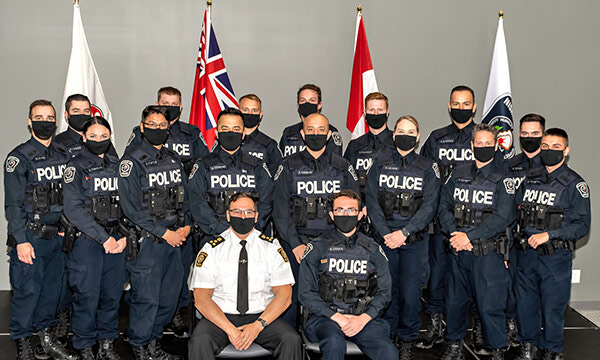 Nishnawbe-Aski Police Service (NAPS) welcomed 17 new police officers to the force on May 27.
Chief of Police Roland Morrison presented the new officers with their badges during a presentation ceremony...