Members of the Teamsters Canada Rail Conference (TCRC) Local 654 in Sioux Lookout are thanking the community for the support they received during Canadian National Railway (CN) strike in November.

As part of thanking the community, the TCRC Local 654 division decided to make two separate donations of $500 to Sioux Looks Out For Paws and the Friends of Cedar Bay.

“Our local Teamsters Rail division has collectively decided to donate $500 to Sioux Looks Out For Paws and $500 to the Friends of Cedar Bay to thank the community for all the support we received during the CN Rail Strike in November. We would also like to thank the town of Sioux Lookout and the by-law department for cooperating and accommodating us during the strike. We couldn't be happier with the generosity we received from this community! All the coffee and food donations really did make a difference on those long days and nights striking around the clock. On behalf of our local Teamsters Rail Division 654, we would like to thank each and every resident that supported us and contributed. The members of our union will be paying it forward and extending our support and well wishes to all the teachers during their strike action. Good luck and stay warm out there,” said Garett Cosco, CTY Local Chairman, TCRC Div. 654 Sioux Lookout.

Lynda Ducharme, Sioux Looks Out For Paws Board Chair, said the donation will be put towards vet bills. Friends of Cedar Bay Chairperson Joyce Timpson said they plan on having the donation go towards something that will benefit the whole community. She said they will be discussing it with the Board soon. 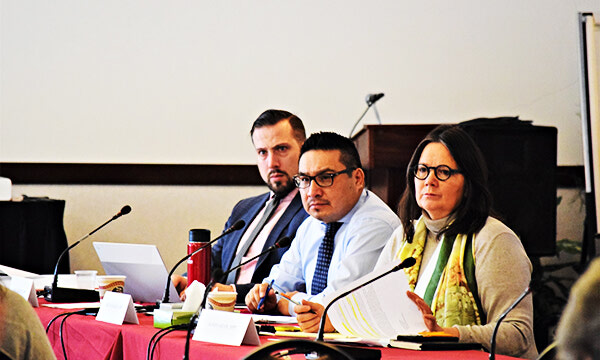 Sioux Lookout was one of five communities in Ontario to host pre-budget consultations conducted by the Standing Committee on Finance and Economic Affairs.