As families seek ways to keep active without straying far from home amid the COVID-19 pandemic, a Sioux Lookout senior and long-time resident, Sue Buckle is inviting community members to curl on her front yard curling rink.

Buckle has had the rink open for personal use since the beginning of this year. She said, “I have had a lot of compliments about the fact of having it because it gives people something to do to get through the winter.” While only a few people were able to enjoy the rink due to the lockdown, Buckle is now welcoming anyone who would like to curl, to call her at (807) 737-7473, to confirm a time when the rink may be available.

The rink is 40 feet long and 12 feet wide. Buckle said, “I wanted it longer. But there wasn’t enough area to do that because at one end I have the fire pit, and so that took away probably 10 feet.”

Deciding to build this year’s rink was motivated by Buckle challenging herself to some outdoor fun activity. She said, “Just trying to beat the fact that I’m getting older and I wanted to prove that I could still do things and be active. I always felt that because I didn’t ski anymore, and because I didn’t skidoo anymore or ice fish, those days are long gone, so I was trying to think what could I do to get through the winter, and it was the curling.”

Introduced to curling in the late 60s, Buckle developed a passion for the sport, gradually joining several local teams until the 90s. She shared that with help from her son, Kirk Davis, she started building her own curling rinks on the lake in Sioux Lookout in 2016. This year, she decided to move the rink to her front yard instead, skipping on some extra work from having it on the lake. Buckle said, “When we are doing it in the yard, we have to pack snow, lots of snow, to get everything leveled, and then flood, flood and flood.”

Buckle said that she hopes the rink will be in good condition for at least another three weeks. She shared that with the temperature fluctuations, she has recently needed to put in more effort in maintenance of the rink. Buckle added that they specifically looked for, bought, and made use of non-toxic paint to ensure the safety of the environment.

“As long as they are COVID conscious, that’s all. It doesn’t matter to me. It’s here, and I would love for people to try it. Some of the people that have come have never curled in their life and they tried it,” Buckle concluded. 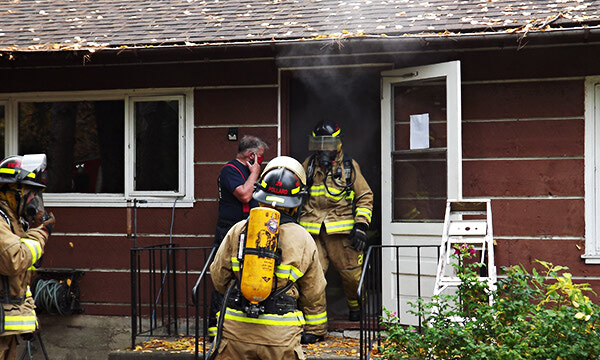 The Municipality of Sioux Lookout Fire and Emergency Service is looking for two individuals interested in becoming volunteer firefighters for Sioux Lookout Hall 1 and Hudson Hall 2.

According to Manager of Emergency Services Fire Chief Robert...