Ontario Secondary School Teachers' Federation (OSSTF) members across the province staged a one-day full withdrawal of services strike, which members in Sioux Lookout also participated in.
The strike closed Sioux North High School and Sioux Mountain Public School for the day.
OSSTF /FEESO President Harvey Bischof released the following message to union members on December 5, which was posted on the OSSTF website: “On Wednesday, OSSTF/FEESO held its first province-wide action in over 20 years. It was an absolutely remarkable day of solidarity throughout the province. Members of the Provincial Executive and OSSTF/FEESO staff visited picket lines across Ontario and were met with high spirits and expressions of resolve that were encouraging and energizing. We also saw, as you no doubt did, massive public support for our positions and willingness to defend them. It could otherwise be dispiriting to have a Minister of Education who publicly and consistently discredits your commitment to students, incorrectly claiming that compensation is the “singular” impediment to a negotiated agreement when there are so many quality-of-education issues still unresolved. But the unity of our membership and support from the public, labour movement, NDP, Liberal, and Green Party MPPs, among others, should tell you our struggle is broadly seen as just and necessary.
“On behalf of the Provincial Executive, thank you to all of you for the overwhelming demonstration of your willingness to stand up for publicly funded education. A massive thank you goes, as well, to all the local leaders who have worked incredibly hard over the last weeks and days to make Wednesday’s action such a success. The work that was done behind the scenes will never be fully recognized but we are aware of it and grateful for it. In the days ahead, we remain prepared to negotiate a conclusion that supports you and your work in Ontario’s world-class education system. If Doug Ford’s government and his Education Minister have not yet recognized that the will of the membership is being expressed through the union and its bargaining team, we will need to take further action. That action will continue to be measured and proportionate to the government’s approach. You will always have a minimum of five days’ notice of next steps. Stay unified. Stay strong. There is so much at stake for each of us and for the future of this province. While we may not have recognized that choosing to become educators meant also becoming unionists, once here, we inherit an obligation to be stewards of publicly funded education because no one knows it better and no one is in a better position to fight for it.”
On Dec. 6, Minister of Education Stephen Lecce released the following statement on the OSSTF job action:
“Union leadership has made clear they will strike again unless we accept their demand for a $1.5 billion increase in compensation, which includes pay and benefits. We value teachers and their commitment to our students. However, OSSTF teachers on average make over $92,000 per year and are the second highest paid in the nation.
“Our aim is a fiscally sustainable education system. We have consistently been fair and reasonable, focused on keeping kids in class.
“However, repeated escalation at the expense of our students' education, to advance higher compensation, higher wages, and even more generous benefits, is unacceptable for parents and students in our province.
We call on OSSTF to cease from escalation, stay at the table, and focus on improving learning in the classroom, not enhancing compensation for their members.”
Locally, Marvin Osmond, OSSTF District 5A (Northern Shield), TBU President shared, “All OSSTF teachers and support staff members took a stand against the planned unprecedented cuts to publicly funded education in Ontario by engaging in a one-day full withdrawal of services strike on Wednesday, December 4th. The strike affected all high schools and some elementary schools in the province and was intended to draw attention to the planned cuts to publicly funded education in Ontario by the Ford government.
“We (OSSTF) are standing up to the Minister of Education and Premier by demanding that they change course and protect the world class education system in this province instead of trying to dismantle it. If the proposed changed are permitted to proceed the students in our schools will have fewer choices in courses and fewer caring adults to help them achieve their educational goals.
“In addition to the strike actions that has already taken place, OSSTF will begin rotating strikes on Wednesday, December 11th. Education workers in the KPDSB will not be on strike that day, but will be engaging the public after school hours by handing (out) our pamphlets which outline our concerns.” 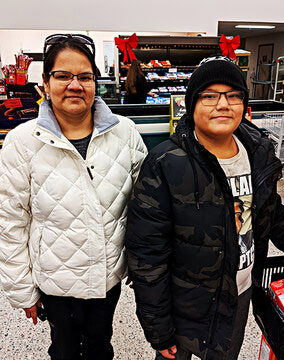 Question of the week: What is your favourite thing about the holiday season?

Read this weeks answers to the Question of the Week.