A current Sioux Lookout resident and a former resident are being featured in the Amplify television series on the Aboriginal Peoples Television Network (APTN). The series is made up of 13 episodes, and each episode is 22 minutes in length. The first episode of the series was aired on Friday, Sept. 11 at 8 p.m. EST.

The Creator and Co-Sponsor of the Amplify series, Shane Belcourt said, “A variety of wonderful individual episodes were created by Indigenous directors and songwriters. An Indigenous songwriter takes a source of inspiration; it could be a book, a piece of art, a poem, teachings, beliefs or anything else. The songwriter then writes a new song about the source they’re inspired by.” Each episode is a platform for Indigenous songwriters and Indigenous knowledge keepers to share ideas about a specific topic, and create music out of it. Each episode ends with a music video of the song that was created, based on the theme in the episode.

Melody McKiver and Nick Sherman are being featured in the Amplify television series. Anishinaabe composer Melody McKiver, a Sioux Lookout resident, looks to the power of water as their source of inspiration. The song utilizes the sounds from the breaking of ice during the spring thaw, to create an instrumental piece, dedicated to the communities surrounding Sioux Lookout.

McKiver, who has also done some shows with APTN said, “I was invited by the show owners. Being a part of the Indigenous performing arts community, and since they were aware of my work, they thought that it was an interesting perspective for me to leave behind. A part of the episode’s journey is about my return to my homeland in Sioux Lookout and trying to base my artistic practice of our overall community work and Nisnawbwe Culture.” The episodes will be aired in both English and Ojibwe languages.

McKiver’s episode, “Spring Break Up” is the fifth in the series, with its air date being Friday, Oct. 2 and the Ojibwe air date on Thursday, Oct. 8. It is directed by Nadia McLaren, an Anishnawbe filmmaker raised in Sioux Lookout, now based in Toronto. “A lot of the episode was actually shot at her parent’s waterfront property (in Sioux Lookout). So, the backdrop of the scene where we’re recording is a lot of the space where Nadia actually grew up and spent her childhood. So it’s nice to have that collaboration and to be able to see Sioux Lookout as a part of Nadia’s experience,” McKiver said.

“For the Sioux Lookout episode, it was a fantastic opportunity to connect Nadia McLaren, a local filmmaker from there, with Melody McKiver, a musician who was returning home. Melody’s family is from the area and they wanted to reconnect with the land and their community, and had already begun that process. This Amplify episode was an opportunity to try to explore that idea, of return to a home community, not as something you run towards as you run away from something else, but like a place to lick your wounds. Not as an escape, but as a home that you want to build a more complete life from. As such, Nadia settled on a visual motif of the Ice Break-Up time, as the season changes, as things begin to flow once again.

“Again, so thankful for the work that Melody and Nadia did together in creating this episode. In Melody’s courage in speaking about why they lost connection to the place, their family’s history with residential school, but also why they remain so hopeful to be back in a true home, a place to build a full life out of and within,” said Belcourt.

Oji-Cree singer and songwriter Nick Sherman, a former Sioux Lookout resident who now resides in Thunder Bay, “reflects on the challenges of living in a town steeped in anti-Indigenous racism,” in the series’ sixth episode – The Fire.

The Ojibwe airdate is on Thursday, Oct. 15 and the English airdate is on Friday, Oct. 9. Sherman has done some shows with APTN along with doing some live shows, earlier in his career.

Sherman said he feels honored to be a part of this series.

He said that being from a family of musicians, he got his connection with music at a very young age. He completed high school in Sioux Lookout, where he started to embrace music, play it on his own and form a band. “I leaned more towards the punk rock, hard-core, when I was younger, still with the attitude of creating music and writing lyrics. So, Sioux Lookout is where I kind of started doing that actively as a young person. Over the years, I just really wanted to continue telling stories and writing songs and so I’ve done that to the best of my abilities. Reflecting on my experiences as a young person, a lot of social issues that happen in the area and of course my own personal experience,” he said.

Thunder Bay being the focus of this episode, Sherman said that the episode highlights several issues like the tension and racism that Indigenous and people of color face in the city, systematic racism, about the inner fears on the street and exploring what that is to people in the city and how it has affected their lives. It explores the day-to-day reality of that city. “Although there’s this sense of negative energy when it comes to talking about these things. There’s also hopefulness, that what do we do to get to the other side? And I feel like that drives the episode and it drove how I wrote the music during the episode,” he said.

“The two episodes from Northern Ontario are true standouts. Nick Sherman, a songwriter who resides in Thunder Bay, was teamed up with a local director, Michelle Derosier. The two of them met for coffee and talked through what they wanted to do with the platform and opportunity that Amplify presented; what were they going to be inspired by that Sherman would write a song about?  The challenges of Indigenous life in current Thunder Bay, its beauty and community, and the fact that their Nations have been in the area for millennia. What did the land have to say to them? About keeping on? About their roots and what the future could and should hold?

“A shout out to both of them for their courage in making that question so personal and vulnerable to them both. That is why the episode shines so brightly, because of Nick’s fearlessness in trying to face down the demons of his hometown and Michelle’s personal connection to this world and wanting to find new visual ways to depict pain and hope,” said Belcourt.

McKiver said, “It’s very important for the residents of Sioux Lookout to recognize that Lac Seul First Nation’s territory extends beyond the reserve boundaries that my family originally lived in and what would now be considered Sioux Lookout.“ Indigenous history isn’t simply an on-reserve, off-reserve distinction, but it’s about the land and especially the water they concluded.

Sherman concluded by saying that collectively they want to inspire communities and to show that there are stories to tell. These episodes inspire people to look within their communities and recognize the talent and contribute towards it. 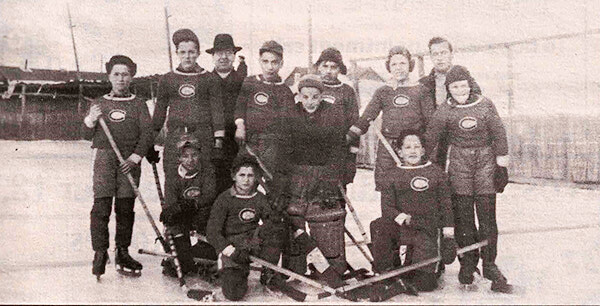 Pic of the Past: Pee-Wee Canadians Champions