A member of the Sioux Lookout Lions Club has received one of the club’s highest honours in the form of the Melvin Jones Fellowship award.

Chris Larsh was presented with the award by Lions Club District Governor Susan Winner during a visit to Sioux Lookout on October 19. The award is named after the founder of the Lions Club, Melvin Jones. Clubs earn the privilege of presenting the award through fundraising efforts. Clubs that have donated at least U.S. $1000 to the Lions Club International Foundation are then able to select who they wish to receive the award.

As Larsh, a long-time Lions Club member explained, “Clubs make donations to Lions Clubs International Foundation, our major charity.  Melvin Jones Fellowships are provided to clubs for these donations, and clubs select recipients of those fellowships.” When asked about his history with the Lions Club, Larsh stated, “I was asked to join the Armstrong Lions Club by a colleague.  I stayed with Lions because of all the great work we do for individuals in need.” Larsh has been a Lions Club member for 31 years.

Winner had this to say about Larsh’s accomplishment, “On October 19, 2021, Lion Chris Larsh became Sioux Lookout’s most recent Melvin Jones Fellowship awardee. Chris began his Lions service in 1990 in Armstrong, Ontario. He transferred to the Sioux Lookout Club in 1998, having now served over 30 years in Lions.  He held the role of both President and Secretary during his time there. He was integral in bringing the club back from the brink of folding. With the Sioux Lookout Lions, Chris has acted as Membership Chair three times, Director one time, VP one time, Secretary six times and President five times, although he has taken an acting president role many times over the years. More importantly than the many roles he has played, Chris is the go-to guy for most things Lions. From answering questions to service activities to fundraising, he’s involved in some way. Congratulations Lion Chris Larsh and Thank You for your service.”

The Melvin Jones Fellowship award is considered the clubs’ highest honour to receive. Last year, Larsh’s wife Lisa was the first recipient of the award that the local Lions Club had handed out in many years. 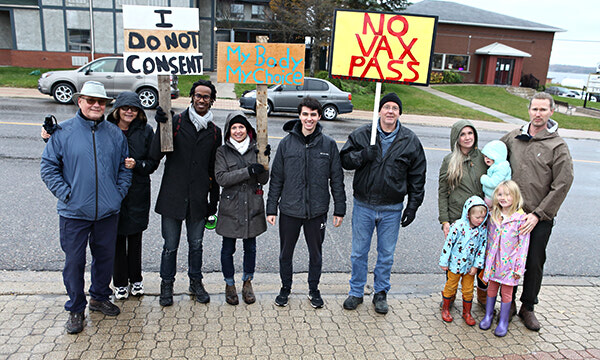 A small group of local residents took to Front Street in Sioux Lookout on Oct. 30 to protest Ontario s COVID-19 public health mandates and the COVID-19 vaccine requirement for members of the federal workforce...