“There needs to be a lot of learning in terms of gender and sexual identity. It can be a confusing topic for some people, especially when we’ve been taught to learn everything in binaries. We need a safe space to ask questions, and we need a place where we’re going to do our best to be non-judgmental… I’m excited about it,” said Sylvia Davis, support group lead.

“I think it will be a chance for people to talk and ask questions. We’re going to have to slowly build a little library of resources. I have a few already where we can bring, set up, and let people borrow… I think we just need to find out our needs first, and we’re hoping to take this slowly and go from there,” Davis added.

Both Morris and Davis said the need for a parent support group was recognized during the Be Free Be Me 2SLGBTQ+ Conference in Nov. 2018. As parents of transgender children, the two are hoping to provide face-to-face support that they would’ve loved to have during their parenting journey.

“During the Be Free Be Me Conference, we were asked to do a parent portion and, out of that, there was a bigger need. It was identified by everybody there, including the coordinators of the event, that there was a bigger need for more parental support. The majority of us had gone through our own journey with our own kids, and agreed that it would’ve been good if we had that. That’s where the seed was planted,” said Morris.

“My kids are gay and transgender, so having people who are on the same journey, as a parent, nearby would’ve been very helpful. I found a Facebook support group for moms of LGBTQ+ kids, and they have a sub group for moms of transgender kids… I found support, but in online support, so face-to-face support is different. My kids are young-adults now and we kind of roughed through high school years, so I feel that I have a bit of experience and Angie (Morris) does too,” said Davis.

Davis said they’re hoping to have the group become classified as a PFLAG chapter.

According to their website, pflag.org, “PFLAG is the first and largest organization for lesbian, gay, bisexual, transgender, and queer (LGBTQ+) people, their parents and families, and allies. With over 400 chapters and 200,000 members and supporters crossing multiple generations of families in major urban centers, small cities, and rural areas across America, PFLAG is committed to creating a world where diversity is celebrated and all people are respected, valued, and affirmed.”

“If we fall under them (PFLAG), we will have a 1-800 for people to contact us. We have set up an email address,” said Davis.

“I want to encourage parents to support and love their kids in whatever journey their kids might be going through. Raising kids is hard, and then you throw gender and sexual identities in the mix… It’s a big challenge and all parents need that support,” she concluded.

Meetings are taking place once a month at 41 King Street, with the first meeting scheduled for Feb. 6 at 7 p.m. 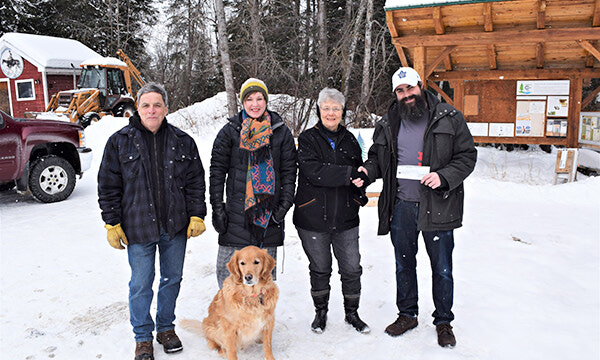 Members of the Teamsters Canada Rail Conference (TCRC) Local 654 in Sioux Lookout are thanking the community for the support they received during Canadian National Railway (CN) strike in November.