Why I am voting Green in the upcoming election

I find election time difficult. I didn't used to. I used to know what I believed in, and which party was closest to that. I have voted the same way federally ever since I turned eighteen, many, many years ago. Provincially, same thing, except for one time when fear got the better of me and I voted "strategically." I regret that because as it turned out, everybody else was just as scared as I was. I could have stuck with my party and things would still have worked out just fine. Voting out of fear is not a good idea.
But things have changed. I don't have to worry about parties, loyalty, strategy or any of that anymore. Today, there's only one issue and only one party that stands a chance of dealing with it. The issue is the environment, and the party is Elizabeth May's Green Party.
I'm grateful. Things have gotten a lot simpler.
No more colour confusion; red, blue or orange. No more ideological splitting of hairs; conservative, liberal, socialist, far right, alt right, middle, left. Nobody really knows what any of those categories stand for anymore anyway.
No more geographical divides; West Coast, Alberta, Prairies, Quebec, Maritimes, in which where you live and what you do is somehow supposed to be more important than what other people do in other places.
No more commodity issues; pipelines, oil patch, grain, pigs, timber, milk, fish, as if we don't need all of it OR alternatives that work, make sense, create jobs, support longer lives and a better standard of living for everyone.
No more free trade nonsense; special deals in which we agree to get screwed on some things in exchange for being able to screw others on other things. Tell me please, are we for or against China, the E.U., Indonesia, Mexico, South America or the US? For or against milk, aluminum, steel, cars, lumber or beef?
But best of all, no more crazy people, and their crazy, crazy talk. No more comparing every upcoming political candidate to that miserable Scrooge masquerading as a President south of the border. No more ridiculous showoff bullies threatening every sane person around them while shaking hands with despots.
I'm also grateful that I don't have to listen to any media BS running up to Election Day. No more agonizing over who said what, who did what to whom, who is more offended or should be more offended. No more worries about misinformation, disinformation, what's being reported and what isn't, whether it's the Russians meddling or the Ukrainians. No more Facebook news, fake or otherwise. Amen!
No, for this election at least I don't have to listen to a single newscast, op ed or call in show in the vain hope of figuring it all out. For once I don't have to make a "best guess" about who might be worse or better on corporations, immigration, taxes, child care, seniors, health care, veterans, marriage, abortion or religious costumes.
I don't have to try to figure out who is more right or less wrong about any of these things. And it's not that these things don't matter. They do. But the fact is these things will always be issues needing careful thought and management by government. That's what we pay them to do and any elected government, ANY, is going to manage them as best they can.
I'm not worried about eliminating political choices. We have options and freedom to choose. But for that freedom to mean anything, for your choice and my choice to be meaningful, depends on us having lives, long lives, generations of them. And right now that's looking doubtful. Climate change is real and increasingly dramatic. It may be irreversible. But we still have a choice now, the choice to try, to do our damnedest.
I was struck by something a climate activist said on the radio the other day. At the end of the interview she asked the host, "What are you going to do different tomorrow?" He answered, "I don't know." And she said, "That's what worries me."
That worries me too. I don't know what I can do tomorrow that is not the same as I did today. It feels like everything I do is part of the problem and nothing I can do will make enough difference to matter.
The good news about this election is that right now, I can do one thing that I know 100% is going to make a difference. I can decide to vote Green.
By voting Green, I can be confident that decisions on all the familiar political issues will be brought into alignment with an overall objective, a goal, a climate action program we all understand and can stand behind. It is critical right now, today, that every department of government, every business, and every home make decisions that directly enable us to reduce carbon output. That is the only issue and what we decide will affect everything else we do, tomorrow but also for generations to come.
I have to ask, Who doesn't want to stop sweating the small stuff, to end the interminable bickering, cut the crap and save the planet? Who doesn't want to say Yes to science, Yes to reason, Yes to letting saner minds prevail, trusting our elected officials, and getting the job done?
That's why, to me, there is only one way to vote in the coming election. Green.
Robert Labossiere 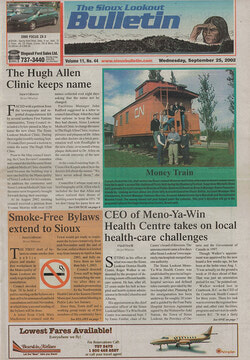