On July 29, 2019, at the public meeting called to review the contamination at the town beach, the CN consultant, KGS, made a public admission that they had not considered the past history of the site back to the huge coal dock fire and they had not identified the Contaminants of Concern related to those past site activities.
That admission completely invalidates and discredits the environmental work and the wholly inadequate so-called remediation plan presented by the CN.
That admission also reveals the astounding incompetence and recklessness of the Ministry of Environment, the Northwestern Health Unit and the Town of Sioux Lookout Environment Committee, in addition to the Town Council. None of these parties have exercised due diligence in their actions. All those parties were previously informed by my May 3, 2018, report and presentation of the history of the site, the clear and immediate risks posed by the site, and the appropriate list of Chemicals of Concern which should have been sampled and analysed for that type of contaminated site. They were also provided follow-up information and were informed of the inappropriateness and flawed nature of the so-called remediation methodology presented by the corporation as well as the potential liabilities associated with building a new multi-million dollar capital project on a contaminated site. That is misappropriation of taxpayer’s dollars in that the proper planning and assessment work was never done for the site and developing the site will assume liabilities which should be totally cleaned up by the polluter, not the Sioux Lookout taxpayer.
All those players are culpable and should be ashamed of themselves for allowing toddlers, children and other sensitive receptors to play and to be exposed to chemicals on a seriously contaminated beach and lakeshore with, as yet un-assessed and potentially extremely toxic human and environmental toxins.
The CN and their consultant should be investigated as to the presence of continuing discharges of known and unknown contaminants into Pelican Lake. The Ontario Water Resources Act prohibits such discharges but the Ministry of Environment has failed to properly manage the issue - failed to do it’s job and has rather become an apologist for the flawed and incomplete environmental work and process conducted by the polluter. The bureaucrats in charge of this fiasco should all be fired.
All the parties involved each have to start to properly do their jobs. There is nothing mysterious or esoteric about environmental site assessment and the protocols and processes for developing a proper and defendable Remediation Plan. The CN has not properly or systematically developed such a plan and appears to have chosen instead to bypass essential process steps and public consultations for the sake of their shareholder’s bottom line. Their shareholders should be aware of the dubious management of the Sioux Lookout contaminated site.
The Sioux Lookout Bulletin was previously forced through the Access to Information Act and Appeal processes to get CN site information from the Town Council on the contaminated site. The insufficient transparency demonstrated by the Town Council suggests that there have been deals made between the Town Council and the CNR that are not transparent for the taxpayer and which beg scrutiny.
All parties do your jobs and stop defending the flawed and clearly self-interested path the CN has presented. The capital project should not proceed until the proper environmental site assessment is done to identify the full range and extent of the site contaminants, the risks and the appropriate remediation options to be considered to return the site to public use. In the meantime the appropriate securing of the site with fencing and public notices and proper interim measures should be implemented immediately.
Yours Truly
Greg Hlady 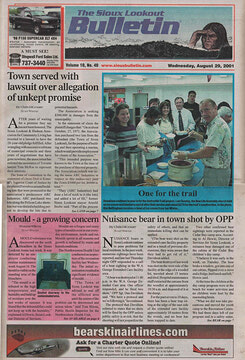