Firefighters from St. Catharines, Ontario donated and delivered a new fire truck to Lac Seul First Nation to service the three communities as part of their new Fire and Emergency Services Department.

“After the last house fire that happened here in Frenchman’s Head in, I believe, February, as part of the debriefing, it was identified there was still some areas the community wanted to improve and one of them happened to be the fire department. Out of that debriefing came the merging of the emergency management department with the fire department to create the fire and emergency services department,” explained Nick Rhone, Fire and Emergency Services Deputy Chief.

“It’s a long time coming. Not just from my leadership now, but also a lot of work was from our previous chief, Chief Bull, and the council at the time. We all agreed that Lac Seul was needing a fire department not only for structural fires, but also for forest fires. I really have to give my gratitude and thanks to all the partners we worked with throughout the years to eventually bring us to where we are today with our development of our department,” said Lac Seul First Nation Chief Derek Maud.

The donation of the fire truck was made possible not only through the fire department in St. Catharines, but also through an organization called Firefighters Without Borders.

“A year ago, the Firefighters Without Borders came to Lac Seul and made a presentation, and that’s when we were first introduced to them. We told them, at that time, we were in need of a truck, so they started putting out feelers just looking for anybody that was donating a truck,” shared Lac Seul Fire Chief David Gordon.

According to firefighterswithout borders.org, “Firefighters Without Borders is an organization dedicated to helping fire departments around the world get a ‘hand up’ so they’re prepared to deal with the next emergency – big or small… We work closely with the team on the ground to build a strategic plan addressing the communities needs and goals, be it training, equipment or a mix of both.”

All those involved in the new department shared their excitement for the new, and extremely important, addition in equipment.

“It’s very exciting… The community is very excited. I’m just happy to be along for the journey. The community leadership is extremely committed to the safety of the residents, and it’s great to have that support from chief, council and staff. Now the guys are excited to keep training and to be ready for the next incident,” shared Rhone.

“When we showed up and saw how excited these guys were, it made the 23 hours in that truck worth it. It was really neat, and they are genuinely excited… For me, it was the first truck I ever rode when I first started in St. Catharines, so it’s neat to pass it on,” said Kevin Beamer, Captain from St. Catharines, who drove the fire truck up to Lac Seul with fellow firefighter Greg Clark.

“It’s such a thrill to have the new fire truck in the community. You can really tell how much these guys care because they made sure to fill every last bit of room on that truck with stuff to support the community, including nine boxes of books that are going to help our kids… We’ll spread them out among the three schools in the community,” Lac Seul First Nation education director Eric Bortlis added.

Kevin Beamer and Greg Clark not only delivered the truck to Lac Seul, but the pair also provided hands-on training to the volunteer firefighters and staff involved on how to properly use the different functions and capabilities of the new truck.

The department is made up entirely of volunteers, which Chief Maud said is a sign of commitment and dedication from the community.

“Any time there’s community involvement with any activity it’s a sign that membership are willing to step up whenever they’re asked to,” he said.

“With the new truck, we’ll be able to service all three communities in Lac Seul… We’re just really grateful to the city of St. Catharines. We’re planning, on National Indigenous Peoples Day on June 21, on having an unveiling of our fire department. We’re hoping that the mayor of St. Catharines will be able to make it up for that day,” Gordon concluded. 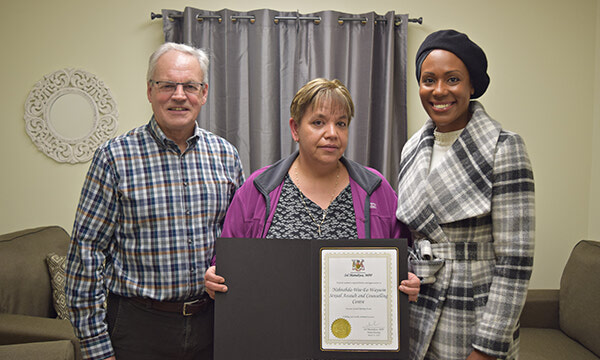 The Nahnahda-Wee-ee-Waywin Sioux Lookout Sexual Assault Centre, which is located at 59 King Street, hosted their official grand opening on March 27.