Lac Seul Police Service (LSPS) officers arrested and charged a 28-year-old women from Lac Seul First Nation after receiving a report on May 9, at approximately 3:30 p.m., of an impaired driver near Kosac Lane in Frenchman's Head.
LSPS Officers located the suspect vehicle in Frenchman's Head and as a result of their investigation, charged the driver with: 1. Operation while impaired- alcohol or drug contrary to 320.14(1) (a) of the
Criminal Code, and 2. Operation while impaired- blood alcohol concentration (80 plus) contrary
to 320.14(1)(b) of the Criminal Code.
The accused driver is scheduled to appear in Lac Seul Court on June 24 to answer to the charges.
“The Lac Seul Police Service remain strongly committed to reducing impaired driving in the community. If you see an impaired driver, please call 911immediately,” Lac Seul Police stated. 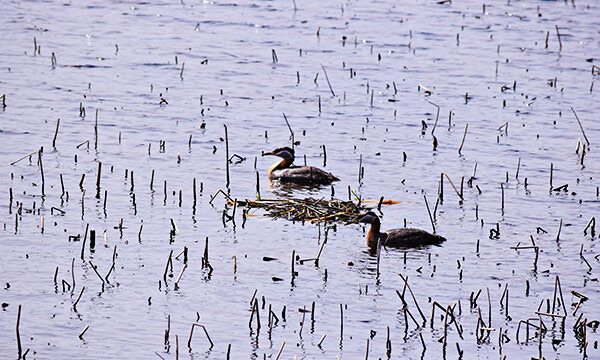 A pair of red-necked grebes building a nest on Pelican Lake, near the Travel Information Centre.
A heron was also spotted there keeping an eye out for a meal.