Lac Seul First Nation got a taste of junior ‘A’ hockey when they hosted a regular season SIJHL (Superior International Junior Hockey League) matchup between the Dryden GM Ice Dogs and the Red Lake Miners on Nov. 15.
The Lac Seul Events Centre was packed with supporters from Lac Seul First Nation, Sioux Lookout, and the surrounding area.
Jeremy Capay, Manager of the Lac Seul Events Centre, said he proposed the idea to host a game to the SIJHL because he wanted to showcase higher level hockey for the community.
“The opportunity came up by simply contacting the President of both teams, as well as contacting the commissioner of the league. I pinned the idea of having a game here, and sure enough they were interested. I pinned the idea of bringing in a new level of hockey into our community, and giving our community something to look forward to,” said Capay.
“This is what makes me enjoy my job. Being a proud member of this community, knowing that we are capable of hosting events like this makes me proud,” he said.
“The atmosphere is great. It’s good to have people here and seeing this arena used, especially at this calibre of hockey,” said Lac Seul First Nation Chief Derek Maud.
Earlier in the day, players from the Red Lake Miners spent some time with elementary students across the Lac Seul Education Authority.
“I thought it was a great idea that the coaches and the President told me they wanted to go and talk to kids and spend time with the kids at the schools. They loved it and had a great interaction. They talked with the kids and played some floor hockey with them too. It was great,” said Capay.
“The kids really enjoyed it. They played some floor hockey up in Kejick Bay with them. Also, we were able to take half of the group to one of our, I guess you could say, landmarks, and they were really surprised at the sight of it. It’s called High Beach, and they were pretty impressed with the view,” said Maud.
“The guys here are great role models for the kids. To see them wanting to go into the schools, spend some time at the school, and do some athletic stuff with the kids, I think that it’s a good opportunity for our students to get inspired and want to be active,” said Eric Bortlis, Lac Seul First Nation Education Director.
It was a game that saw the Ice Dogs jump out to a fast start, and they didn’t look back.
In front of many family members and friends, former Sioux North High School Warrior Ben Forbes got the Ice Dogs on the board just five minutes in. Then, just under ten minutes later, former Warrior Cortez Favot extended the lead for the Ice Dogs, who boasted a 3-0 lead after the first period. The Ice Dogs would score three more goals throughout the game, leading to a 6-1 victory over the Miners.
Favot, Forbes, and Kendall Schulz said they cherished the opportunity to play close to home in front of family, friends, and familiar support.
“It was a lot of fun. It was good to see recognizable faces in the stands, and all our families were in attendance too. I loved it. I love playing close to home,” said Forbes.
“It was good. You could feel that all the people were going to come and watch,” said Favot.
“It was amazing. It might not have been a home game, but it still felt like it was,” said Schulz.
The Dryden GM Ice Dogs are currently sitting in fourth place in the SIJHL league standings, and they’re just two points behind the third place Miners.
With most of their games and season still ahead of them, the former Warriors are hoping to keep improving and contributing to the team.
“It’s been great, and it’s a lot of fun. The league is really close and we’re battling every game… We keep battling every day, keep getting better in practice, and we’re working hard, which is starting to pay off now,” said Forbes.
“We just have to keep battling hard, get wins, keep practicing, and keep grinding to improve our own skills and contribute for the team,” said Favot. 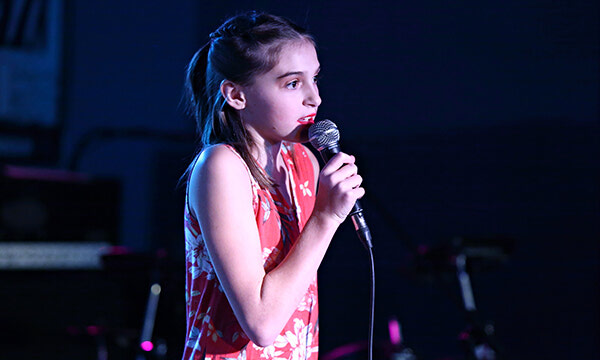 The Sioux Lookout Multi-Cultural Youth Centre was packed last Saturday night for an evening of musical performances by learners in the centre music program.