Broomball players from across the region competed in Lac Seul from March 6 to 8 during the Northern Lights Broomball Championship
Tournament.
Six teams, with representation from Ignace, Mishkeegogamang First Nation, Lac Seul First Nation, Cat Lake First Nation, and Sioux Lookout, competed in the tournament.
The Slate Falls Freebirds defeated the Mishkeegogamang Stormfront to take the A-side championship, and the Cat Lake Wreckers defeated the Mishkeegogamang Warriors to earn the B-side championship.
Tournament organizer Jonathan Chum said he’s looking to host the mixed tournament annually in Lac Seul because of the interest in the sport across Northwestern Ontario.
“There’s people interested out there, they just don’t have access to this. It’s a need here in the north because Kenora and Ignace used to be hard-core broomball players. They want to come up here now and play in our tournaments, but we have to get it going,” said Chum.
“Dryden used to host a tournament every year at this exact same time, but they stopped around two years ago. We’re kind of taking over, and we’re trying to get it here and keep it here. It’s going to be annual and it’s going to be bigger… We had communities that were committed to come down, but they ran into a few situations where the weather was warm and it’s hard to come down here when you don’t have winter roads.
“We know for a fact that there’s a lot of interest out there… It’s a big sport up in the north, but the access to actual playing is the hard part,” he said.
Chum said the tournament received support from local businesses and organizations.
“Madsen GM donated the trophy, Choose Life through Lac Seul donated the ice time, Fresh Market Foods donated, the Miijim Co., Chicken Chef, Oshtugon, Mascotto’s Marine, and DJ’s Gas Bar helped support the tournament,” he said. 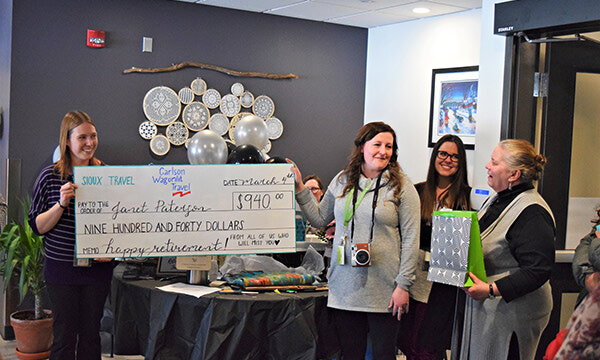