Lac Seul First Nation residents paid tribute to their ancestors with their day-long celebration of the First Nation’s Treaty Day in Kejick Bay, on August 20.

Band Councillor for Kejick Bay, Stanley Littledeer said, “Our Lac Seul First Nation signed a treaty on June 9, 1874. We just wanted to honor our people, our ancestors that have passed on, by hosting these activities, and also for people to come together as a community. We had guests from all over.” He added, “This year we had a variety of events that happened throughout the day. We had activities and a lot of fun, and food to eat.”

The thirteen-hour long event offered about a dozen different unique and fun activities for people of all ages, with a mouth-watering BBQ lunch and supper, was attended by over 300 people across Lac Seul First Nation. “It went really good. We got to see a lot of people from other communities, it brings everyone together,” said Littledeer.

Littledeer shared that one of their most popular events of the day was the Boat Race, which had seven entries. This distinctive race required participants to prepare their own boats from scratch. Littledeer said, “People were given a couple of weeks to start building their boats and to actually race them. That was one of the biggest highlights of the day.” He said that participants weren’t allowed to use or recreate professionally made boats, for whole or part of their build. “We had an award for the most creative boat. Some of the contestants spent quite a few hours designing the boat,” Littledeer added.

Another part of the celebration was a Drag King and Queen competition. Littledeer said that they conducted this event to celebrate the unique identity that each person has. “Sometimes, people are different, and we just wanted to respect that and have fun, dress up and enjoy our day,” he said.

Some other activities held throughout the day included a Tug of War Challenge, games specific for youths, adults and Elders and Plane Rides. The First Nation residents who attended the event also received their $5 Treaty Payment, with $15 for the council members and $20 for the Chief.

Littledeer shared that they plan to conduct their next year’s Treaty Day celebration at Whitefish Bay. 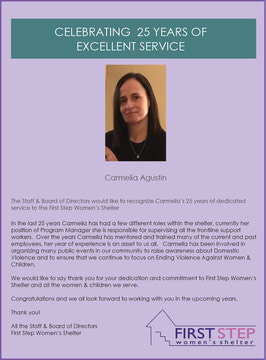 The Staff & Board of Directors would like to recognize Carmelia s 25 years of dedicated service to the First Step Women s Shelter.