Lac Seul First Nation officially unveiled their Fire and Emergency Services Department, along with all of their equipment, at the Lac Seul Events Centre on June 21.
The Lac Seul Fire and Emergency Services Department was established formally by Band Council Resolution on Feb. 20 of this year. Since then, the department has maintained and trained a roster of 17 regular volunteer firefighters.
In April, Lac Seul First Nation received a donated fire truck from the City of St. Catharines in collaboration with an organization called Firefighters Without Borders, which is an organization dedicated to helping fire departments around the world by providing training and equipment.
St. Catharines Mayor Walter Sendzik and St. Catharines Acting Fire Chief Jeff McCormick were in attendance to celebrate the official launch of the Lac Seul Fire and Emergency Services Department.
“When it came to what we could do with this pumper truck as it was coming out of service, it was the fire chief who put up his hand and said let’s look and see if we can partner with a First Nations community that needs a pumper truck. The Firefighters Without Borders got involved and, through the chief’s leadership, there’s a partnership now with Lac Seul,” said Sendzik during the launch ceremony.
“It warms my heart to know that there’s a firefighter service that’s going to be here to protect the people of Lac Seul… What I’m hoping for is a longer term relationship, Chief Maud, with the community. We have the Canada Summer Games coming to Niagara in 2021, and my hope is that we have the youth from Lac Seul, if there’s an opportunity, to bring them into Niagara to help be a part of those games. We’re having over 5000 youth from across the country… If we could have a partnership with Lac Seul, and bring kids down to experience it, it would be an honour for us to welcome you into our community as well,” Sendzik continued.
“The truck and all the equipment that came with it are just the tools. It’s the men and women here that immediately showed the dedication, wanted to train, and wanted to learn how to be effective with the equipment and how to do a fantastic job… It’s not the equipment, it’s the men and women that wear this uniform proudly,” said McCormick during the launch ceremony.
“We’ve been talking about fire management for a long time… We’re at a state now where we probably have enough machinery the size of a municipality. I really want to thank St. Catharine’s municipality and their fire team for donating this amazing truck. When it first came in I couldn’t believe it, I thought it was brand new,” said Lac Seul First Nation Chief Derek Maud.
“It was amazing to have the mayor and fire chief from St. Catharines come up, as well as from Sioux Lookout. It’s been a few months in the works. It was an amazing testament to the community, the community leadership as well as all the staff and firefighters who have been working on this for a while. I just felt honoured to be a part of the day and have the opportunity to see such an amazing accomplishment by Lac Seul,” said Nick Rhone, Fire and Emergency Services Deputy Chief.
“To see the equipment they started with 20 years ago to what they have today is a great addition to the Lac Seul community. They can also fight fires not just here in Lac Seul, but they can also help us in Hudson if we require some assistance and vice versa… It’s a well-equipped truck, it’s in great shape, and it will provide great fire protection,” said Sioux Lookout Fire Chief Rob Favot.
In a statement released on June 21, Kiiwetinoong MPP Sol Mamakwa congratulated Lac Seul First Nation on the launch of their new Fire and Emergency Services Department. He touched on how influential the launch could be to other First Nations communities.
“The safety of all Indigenous peoples in their homes, both on reserves and off, must always be an evolving priority. Your efforts to secure the relevant safety instruments through collaboration and community partnerships are exemplary… I congratulate you all on your tireless efforts to provide a much needed coordinated response to mitigate disaster. As leaders in this initiative, you are among the first reserve communities to do so in the northwest. This launch of your Fire and Emergency Service Team signifies that you are trailblazers and helps to set a course for others to follow suit,” said Mamakwa.
The Lac Seul Fire and Emergency Services Department shared the donation of the fire truck from St. Catharines allowed them to purchase other used equipment such as a tanker, second pumper for Kejick Bay, and a first response and command vehicle.
When asked about the official launch of the Lac Seul Fire and Emergency Services Department, Lac Seul First Nation Fire Chief David Gordon shared that the team is looking forward to serving the community, especially with the addition of the new fire truck.
“Our whole fire team is happy that our Fire and Emergency Services are finally launched. We’ve been training and practicing for quite a while now, and we have most of the equipment that we need. We’re really excited, happy, and we’re looking forward to serving the community. Of course our hope is that nothing serious happens, but we’re ready,” said Gordon.
The department shared that since their establishment in February they have responded to three significant fire calls. Their response time was under ten minutes, with an average of ten-to-eleven firefighters responding with a pumper truck and a second pumper or tanker as needed.
Their future plans include obtaining proper funding to ensure community safety by adhering to NFPA (National Fire Protection Association) standards for protective gear, apparatus, and equipment. The department is also working towards a third station to be based in White Fish Bay so all three communities benefit from immediate fire protection. 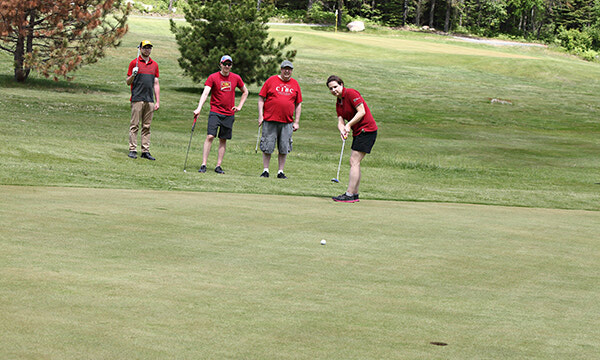