Lac Seul First Nation’s flood claim case was before the Supreme Court on Dec. 8. After hearing the case, judgement has been reserved.
The Southwind case relates to the unlawful flooding of Lac Seul in 1929 following the construction of the Ear Falls Dam.
As a result of the construction of the dam, nearly one-fifth of the Lac Seul reserved was flooded and rendered unusable.
Timber was lost in the flooding, graves were desecrated, homes and fields were destroyed and portions of the reserve were severed from each other.
The Federal Court awarded Lac Seul First Nation $30 million in equitable compensation.
Lac Seul First Nation appealed the decision, arguing the Federal Court erred in its assessment of equitable compensation. The appeal was dismissed by a majority decision.
MPP Sol Mamakwa (Kiiwetinoong), the NDP’s critic for Indigenous Relations and Reconciliation, issued the following statement in support of Chief Clifford Bull and Lac Seul First Nation:
“The Southwind case is a result of the breach of fiduciary responsibilities by the Crown in the aftermath of the unlawful 1929 flooding of Lac Seul’s land base. The flooding resulted in nearly one-fifth of the reserve being rendered unusable. Lac Seul has been fighting since 1985, since the Nation first filed this claim, to find a just resolution with the federal government.
“The generational impacts of this flooding are ongoing, as the community’s way of life which includes hunting, fishing and manoomin (rice) harvesting has been irrevocably disturbed.
“The flooding that started in 1929 continues to damage the gravesites of community ancestors.  Erosion is exposing burial sites and remains are being washed away into the lake, a traumatic experience for the community. The people of Lac Seul need support now to make sure these sites don’t erode any further.
“The case has very significant implications to the practical application of Treaty rights for the Crown and First Nations across Canada. Lac Seul First Nation has been fighting to right this injustice since the Crown unlawfully took their lands in 1929.
“I stand with them in solidarity.
“Indigenous people and our ancestors sacrificed a great deal in the treaty process and still, we have to beg the provincial and federal governments to uphold their treaty responsibilities.  The people of  Lac Seul have been waiting more than 90 years for a resolution.
“Without honesty, fairness and respect from Ontario and Canada, what we have is not a relationship. It is abuse.
“That is why I do not stand for the royal anthem or the Canadian anthem at Queen’s Park. I stand for respect and fair treatment.
“I stand for our ancestors: to demand respect for the treaties they signed.   I stand for the fair treatment of Indigenous people so that our children can access education, clean water and safe housing.
“It’s time for the governments of Ontario and Canada to keep their side of the Treaties, so that another generation of Indigenous children doesn’t have go without clean drinking water and safe schools.
“Only then, will we stand together.” 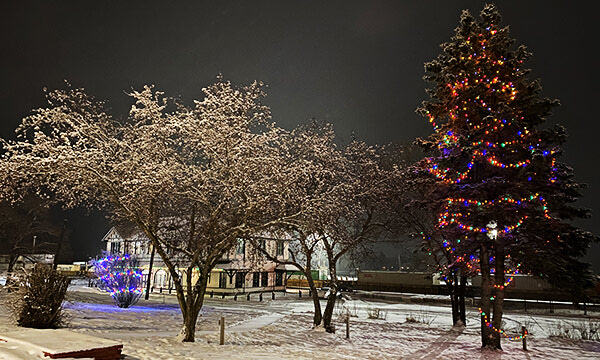 Centennial Park was spotted aglow with holiday cheer last Sunday evening.
Many area residents are getting in the holiday spirit, decorating their homes and businesses with Christmas lights.