WARNING: This story contains details some readers may find distressing.

It was a busy day for residents of Lac Seul First Nation as they gathered to commemorate the Bringing Our Children Home event which was held on July 14, which brought together former Indian Residential School survivors, forensic experts, and church and government officials to determine the next steps in moving forward with the search for missing children on the grounds and surrounding area of the former Pelican Lake Indian Residential School (IRS) and former Sioux Lookout Zone Indian Hospital.

On the morning of Thursday Sept 30, the community gathered at the bridge leading into Frenchman’s Head, then walked the highway to the Kejick Bay turnoff. It was here, under a large white tent that had been erected to provide shelter from whatever the day’s weather had in store, that ceremonial drumming, prayers, and the many speakers present were able to relate their experiences while children in the Indian Residential Schools system. But intermingled with the sorrow of past injustice, there was also laughter. The event was host to not just the adults and elders of the community but the students of the three Lac Seul elementary schools as well, approximately 280 students of varying ages in attendance from Morris Thomas Memorial Christian School (Whitefish Bay), The Waninitawingaang Memorial School (Kejick Bay), and Obishikokaang Elementary School (Frenchman’s Head).

As Kristin Ward, Principal of Obishikokaang Elementary School, explained, “The children in our schools have all been affected by the residential school system. Although they themselves did not attend, they are affected by intergenerational trauma, and the loss of their language and culture that came with children being taken from their homes.” Ward went on to say that, “It is an important day to reflect on the impact these schools had on the families in Lac Seul and all the other communities across the country. As educators, it is a day to reflect on the work that we are doing, and work that we should begin to do as educators to ensure that this generation of students can attend a school in their community that makes them feel safe, supported, connected to their language and culture, and provides them with the learning they need to find success as adults in their community and beyond.”

Shera Wesley is the Finance Clerk for Lac Seul First Nation, and a mother as well. As she explained, “I’m here because my parents attended residential school from the age of six and I know my dad went until he was a teenager, same as my mom. They often talk about the loneliness they felt at residential school. How they were separated from their parents and their home. And I think that it’s important that we continue to teach our children about what happened, but also, it’s heartbreaking at the same time because I can’t imagine going through that pain as a mother. I think it also shows us too that we’re very resilient people and that we can draw on that strength, and to continue our culture.”

The day’s events also recognized the passing of Bill-C-92, which plans to shift Indigenous child welfare to Indigenous organizations. As the day’s activities came to a close, the community gathered again at the Frenchman’s Head Bridge, where there was a ceremonial flag raising at 2:15 to commemorate the 215 students found at the former Kamloops Residential School in Kamloops, British Columbia. 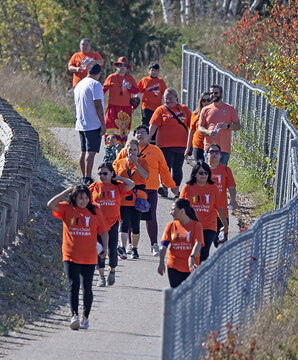 A walk to remember

Some walked to remember. Some walked to heal. Some walked to show their support of other people s journeys. Whatever their reasons, on Wednesday, September 29, for the fifth year running, people of all ages met at the Frog Rapids Bridge to walk...