Lac Seul First Nation is demanding action to address an ongoing issue of erosion of sacred ancestral burial sites along the shores of Lac Seul.
The First Nation stated in a Sept. 22 news release that the erosion began with the illegal flooding of its reserve and traditional lands in 1929 when the Ear Falls dam was built to supply power to Ontario and Manitoba.
Lac Seul First Nation states that no legal authorization was ever obtained for flooding the reserve land.
“As the illegal flooding has persisted for over 90 years, Lac Seul First Nation’s community members have repeatedly faced the emotional burden of reburying eroded remains and witnessing destruction of their burial sites.
“Since the mid-1920s, the First Nation has sought assistance to resolve this hardship, yet the provincial and federal governments have not taken responsibility or offered any meaningful support,” Lac Seul First Nation shared via the news release.
“More recently, the First Nation sought assistance from Canada in 2006 and 2011, but Canada failed to respond.
“The First Nation has also called upon the Lake of the Woods Control Board and Ontario Power Generation to take action as Ontario Power Generation and Manitoba Hydro continue to be the main beneficiaries of the Lac Seul storage reservoir,” Lac Seul First Nation further informed, alleging, “Calls for help so far have fallen victim to endless finger-pointing among governments and hydro-interests about who is required to take action.”
Chief Derek Maud of Lac Seul First Nation commented, “For over 90 years, this issue has been ignored by Canada, Ontario and Manitoba. It continues to be ignored. The illegal flooding of our land was horrific enough, and the continued uncovering of our ancestral remains is an on-going and appalling reminder. If the Crown is sincere about reconciliation with First Nations and honouring its Treaty relationship with us, it must take action on this issue immediately.”
Lac Seul First Nation further shared, “The First Nation finds it disappointing and unacceptable that Canada has not acknowledged or addressed this outstanding grievance, particularly when Canada caused and has known about the grievance for almost a century. Lac Seul First Nation’s Chief and Council are calling again on Canada, Ontario, and Manitoba to come forward to work with the First Nation to develop an immediate shoreline and gravesite protection strategy.
“The Council has confirmed that further burial sites are still at immediate risk of exposure – and that further community suffering can be avoided if the Crown fulfills its duty to First Nations and swiftly works with us to implement a lasting solution.”
The Ear Falls Dam flooded over 11,000 acres of the First Nation’s reserve land.
According to the First Nation, at the time of the flooding in 1929, there were an estimated 1,400 to 1,500 burial sites around Lac Seul.
Lac Seul First Nation has consistently raised concerns to Canada about damage to its burial sites since the mid-1920s.
Chief Ningewance, a former Chief of Lac Seul First Nation, presented the gravesite erosion issue publicly before the Royal Commission on the Northern Environment in 1977.
In the news release, he is quoted as stating,“Everyday, of every month, for the past few years, the remains of my forefathers have been washing up from their sacred burial grounds. There they sit on the edge of our lake, disturbed from what was to have been their eternal resting place. The remains act as a constant reminder that Indians pay a harsh price when the white man and the white man’s power visit the land of my people…we were never given full compensation for the flooding. And were never given the resources to move our ancestor’s graves and save them from a watery destruction…none of us understood that our sacred burial grounds would be mangled and destroyed. We were never told.” 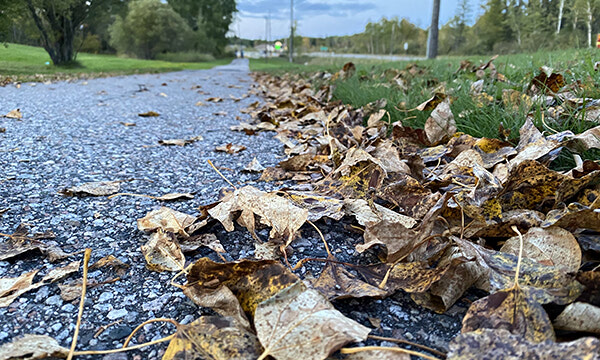 Autumn leaves Leaves are changing colour on area trees and