Hundreds of surrounding area students had the chance to explore opportunities for their future during the Annual Lac Seul Career Fair at the Lac Seul Events Centre on May 1.
“Lac Seul does it as a community every year, so we bring together as many (exhibitors) as we can and invite all the schools from the surrounding areas… We typically invite grades seven and eight and up, but we invited as many, and everybody, that we could and we have a bus coming from Dryden. It’s open to the community as well, so it’s not just about the schools,” explained Kandy Bechard, Employment and Training Manager at the Lac Seul Training Centre of Excellence.
Students from Lac Seul First Nation, Sioux Lookout, Dryden, and even Kenora attended the all-day event. Bechard shared that they set up a passport system that required students to be engaged throughout the day.
“I’m really excited about it… so the kids have to ask questions of vendors that came out for a chance to win some really great prizes… A lot of people have come out and made this possible, and we’ve had lots of donations to make this possible,” she said.
Some of the exhibitors enjoyed the passport format, and they agreed that it kept the students interested and involved during the event.
“The passports are good. It forces them to come to tables and say hi, so that’s really great. They’re asking a lot of good questions,” said Carly Smythe, exploration geologist with Great Bear Resources.
“It’s been really good. There’s a lot of positive interest in what we’re doing, and a lot of good questions,” said Carl Ginn, project geologist with Pacton Gold.
“It gets them more involved. Instead of just walking around it invites them to come and talk with us. It’s been great,” he continued.
Along with interacting with a wide variety of exhibitors, students were able to enjoy performances from the Asham Stompers, who are a Metis and First Nations dance group who combine the Red River Jig with square dancing.
Some of the students in attendance agreed that it was a fun-filled, and informative, day.
“It’s good. Some of the vendors have free stuff too,” said Mason Flatt, grade seven student at Sioux Mountain Public School.
“It’s been cool learning about all these different jobs,” said Summer Maud, grade six student at Waninitawingaang Memorial School.
“It’s been a fun day,” said Kolby Goodman, grade seven student at Sioux Mountain Public School.
“It’s good. We loved the Choose Life booth. They gave us fidget spinners!” said Morgan Quezence, grade six student at Waninitawingaang Memorial School.
The career fair featured appearances from Boart Longyear, B.C. Minerals, Confederation College, DOMTAR, First Mining Gold Corp, Gold Corp, Great Bear Resources, Hydro One, Keewatin-Patricia District School Board, Kwayaciiwin Education Resource Centre, Ke-nawind Housing, Lac Seul Choose Life, Lac Seul Police/OPP, Lac Seul Volunteer Fire Department, Ministry of Natural Resources and Forestry, Morgan Fuels, Nishnawbe-Gamik Friendship Centre, Nuclear Waste Management Organization (NWMO), Obishikokaang Resources Corporation, Ontario Native Women’s Association (Sioux Lookout), Ontario Power Generation, Oshki-Pimache-O-Win Education and Training Institute, Outland Camps, Paawidigong First Nations Forum Inc., Pacton Gold, Pure Gold, Rubicon Minerals Corp, Seven Generations, Shooniyaa Wa-Biitong, Sioux Lookout First Nations Health Authority, Sioux Lookout Meno Ya Win Health Centre, Sioux-Hudson Employment Services, Tikinagan Child and Family Services, Tim Hortons, Treasury Metals, Wahsa Distance Education, and Wataynikaneyap Power LP. 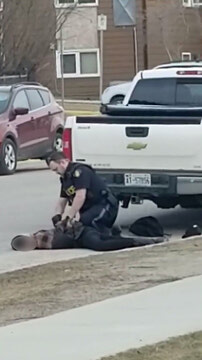 A video of the arrest of a 16-year-old Indigenous girl in Sioux Lookout on the evening of April 23, near the corner of Fifth Avenue and King Street, has gone viral and has many people in the video s comments section on social media questioning the...