Governor General of Canada Julie Payette delivered the Speech from the Throne on Sept. 23, opening a new session of parliament and sharing the Liberal government’s direction, goals and outlines, as well as how it intends to achieve them.

“The Liberals have no plan to get our economy moving, no plan to address the health crisis, and no plan for the North,” Melillo shared in a statement last week.

“The speech today contained no pledge to increase health transfers to the provinces, no strategy to increase access to testing, and no timeline for approvals for rapid, at-home tests.

“The Liberals gave us vague promises about improving business support programs, after dragging their feet for months as Conservatives called for reforms,” the Conservative MP stated.

“The government finally acknowledged that our tourism industry needs help – after ignoring MPs from all parties for months. I hope the Liberals will finally step up to support tourism operators, but I fear it will be too little, too late,” Melillo added.

He went on to state, “The Liberals also claim they’re going to address infrastructure gaps, unsafe drinking water, and lack of internet access in the North - issues on which they’ve been all talk and no action for years.

“But the Throne Speech provided no details about how the Liberals intend to achieve these goals, and no commitments to the infrastructure investments we desperately need.

“The one thing they were explicit on was their intention to further restrict the rights of law-abiding Canadian gun owners.

“Going into this speech, I hoped the government would present a plan to bring Canada through this crisis. It’s clear to me now that they have no such plan.

“The Conservatives will continue to hold this government to account and provide a compassionate, ethical alternative under the leadership of Erin O’Toole.”

Sioux Lookout Mayor Doug Lawrance said the impact of the Speech from the Throne on the Municipality of Sioux Lookout, “is very difficult to say at this point.”

“The Speech from the Throne is a broad policy statement, indicating the general direction the government intends to take for the upcoming session of parliament. While there are lots of “hints” at priorities, how they will be translated into practice and how they will impact Sioux Lookout won’t be known until specific legislation is introduced,” Lawrance said.

“Many items will be of interest to our community, including: a national childcare program; ongoing investments in infrastructure which are important and needed; developing national standards for long-term care facilities could be beneficial; certainly, the targeted support for travel, tourism and hospitality industries that have been (hit) hardest from the pandemic is welcome; and, climate change reduction programs are welcome including energy efficiency retrofits,” Lawrance shared, concluding, “Other items of specific interest to Sioux Lookout included: affordable housing and reduction of homelessness; rural broadband expansion; wildfire prevention; banning single use plastics and improving recycling; and, targeted support for culture and arts.”

The Speech from the Throne, A Stronger and More Resilient Canada, can be read, or viewed at: www.canada.ca/en/privy-council/campaigns/speech-throne/2020/speech-from-the-throne 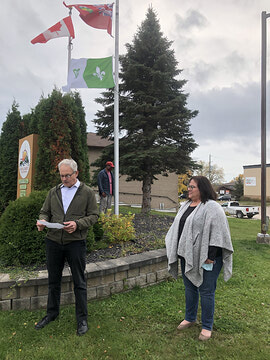