“Our hearts are with the people of Nova Scotia in the wake of what was a terrible tragedy. I really am disappointed to see that the Prime Minister has used that horrific event as a platform to advance his political agenda,” Kenora MP Eric Melillo stated last Friday of an immediate ban on ‘assault-style’ firearms announced by Prime Minister Justin Trudeau on May 1.
The ban will include over 1500 models and variants of ‘assault-style’ firearms.
“These models represent nine categories of firearms and two types identified by characteristic. Some of their components are also prohibited. The newly prohibited firearms and components cannot be legally used, sold, or imported. Owners must also continue to safely store them, and may only transfer and transport them under limited circumstances,” a news release from the Prime Minister’s Office informed.
“There will be a transition period of two years to protect owners of newly prohibited firearms from criminal liability while they take steps to comply with these new rules. This two-year amnesty order under the Criminal Code is in effect until April 30, 2022. There are exceptions under the amnesty for Indigenous peoples exercising Aboriginal or treaty rights to hunt, and for those who hunt or trap to sustain themselves or their families. These exceptions will allow for the continued use of newly prohibited firearms in limited circumstances until a suitable replacement can be found. By the end of the amnesty period, all firearms owners must comply with the ban.”
“Because of gun violence, people are dying, families are grieving, and communities are suffering. It must end. Assault-style firearms designed for military use have no place in Canada. By removing them from our streets, we will limit the devastating effects of gun-related violence and help make our country safer,” Trudeau stated.
“Prohibiting these firearms immediately freezes the market in Canada for the most prevalent assault-style firearms that are not suitable for hunting or sports shooting purposes. These dangerous firearms are designed for the battlefield, not for communities, but have been used tragically to target women, students and worshippers because they are efficient in maximizing fatalities. Today’s initiative is the first step in a broader firearms strategy that will address illegal activities, violence, and self-harm. Our government is also committed to protecting public safety, while ensuring hunters, farmers, and law-abiding recreational firearms owners are also treated respectfully and fairly,” Minister of Public Safety and Emergency Preparedness Bill Blair added.
“Weapons designed for the battlefield have no place on our streets or in our communities. Canadians gave us a clear mandate to ban these dangerous weapons. That is exactly what we are doing with the targeted measures we are announcing today,” commented Minister of Justice and Attorney General of Canada David Lametti.
“Conservatives have been calling for a number of ways that we can combat gun crime,” Melillo said. “We suggested more support to anti-gang units, increased mental health support, crackdowns on illegal firearm importation just to name a few. However, we’ve been very clear that we do not support an arbitrary ban because all of the evidence has told us in Canada this is costly, it will be ineffective, and it only targets law abiding firearms owners.”
Melillo said Friday, “We don’t have all the details of what the Prime Minister announced today, but we’ve been clear from the start that we don’t believe it will be useful and frankly I’m confused as to why the Prime Minister choose today to announce this. It’s something that’s going to take two years to implement. He definitely had some time to make the announcement and we definitely had time to have that debate if he was going to bring it to the House of Commons, but I think right now with all that is going on, we should be focused on immediate economic relief for the people that have been impacted by COVID-19, not making announcement for programs that are going to be years to implement.” 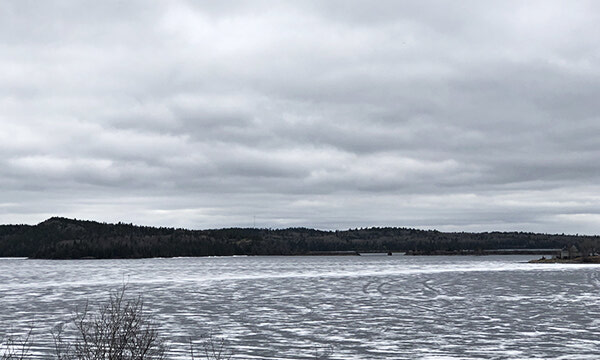 The ice on Pelican Lake is continuing to melt away a little more each day, a sure sign, along with plants beginning to grow and the arrival of many species of migratory birds, that spring has arrived.