Grade six, seven, and eight students at Waninitawingaang Memorial School in Kejick Bay had the honour of receiving their spirit names during a traditional drum ceremony on Jan. 14.
Sixteen students, along with their teacher, received their spirit names during the ceremony after spending the last few months learning traditional drumming, traditional singing, sacred teachings, and the seven grandfather teachings from Lac Seul First Nation cultural land-based teachers.
“Everything that’s being shared is all geared towards, what we call, the seven grandfather teachings and living with those in our everyday life that they become more in tune with themselves and in tune with the natural world so that they’re able to walk in a good way, not only with themselves but with all people that are here in the world with us,” said Joe Wesley, cultural land-based teacher.
“The students were asking about the spiritual names and how they can get their spiritual names. We approached an Elder, his name is Ralph Johnson, and we asked him to conduct a ceremony to get these kids their spiritual names. There’s different ways and different ceremonies to get a name, and the way we did it here was through a traditional drum ceremony and that was run by Ralph Johnson,” said Weslie Wabano, cultural land-based teacher.
The students were thankful for the ceremony, and they said they enjoyed receiving their spirit names.
“I was really grateful that it happened and that I was able to get my spirit name. I was really pumped up when they mentioned it and, knowing that I’m also a dancer, I’ve always wanted my spirit name to come with me as I go through these years… Now that I’m this age, I successfully got my spirit name and I’m happy about it,” said Mohoney Trout, grade eight Waninitawingaang Memorial School student.
“I was very happy to get my spirit name. I enjoyed learning from Joe (Wesley) and Weslie (Wabano), and I’ve never felt this happy doing something like this. If there are more classes like this out there, I will probably go to them. I just want to enjoy my own culture,” said Trisha Lawson, grade eight Waninitawingaang Memorial School student.
“It was good to get my spirit name. I enjoyed it,” said Joni Trout, grade six Waninitawingaang Memorial School student.
“I like drumming, and it made me interested in my spirit name. It was fun, and I’m grateful for the ceremony,” said Mitchell Trout, grade six Waninitawingaang Memorial School student.
Waninitawingaang Memorial School teacher Sean Tudor also received his spirit name. He said he learned a lot from the experience, which he described as humbling and an honour.
“This was a different experience because I received a spirit name as well. I actually argued against it and I didn’t think it was appropriate; however Joe (Wesley) and Weslie (Wabano) sat me down and said that I needed to become a part of this. That changed the whole dynamic for me… It’s been extremely humbling. I was a student right along with the rest of the young people in my class, so it was a major learning experience for me and also a tremendous honour,” said Tudor.
Other staff and teachers described the students’ pursuit of the teachings, and their spirit names, as delightful and inspiring.
“For me, it was a real honourable stage in their lives to witness and to see the amount of them that wanted to take those steps into that direction. It was also uplifting at the same time too to see that interest from the youth. The youth we’ve been working with seem to take in the information pretty well. It’s almost mind-blowing, and it’s a beautiful thing to witness,” said Wesley.
“It’s almost like something you really wish for starting to come true. To see the young people wanting to have more understanding of what was here on the continent originally, wanting to grasp the sacred teachings, and also wanting to take the effort to practice the way of life is a real humbling and beautiful thing. There was so many times at the ceremony where we were just in awe,” Wesley added.
“The biggest thing for me is watching the students take so much pride in it and that they are the drivers behind this. Joe (Wesley) and Weslie (Wabano) were absolutely teaching the kids about this stuff, but the kids are the ones that are pushing for more and more. It’s just wonderful,” said Alisha Dasti-Hill, Waninitawingaang Memorial School Principal.
Dasti-Hill said the plan is to continue providing students with similar opportunities if the interest is still there.
“By design, we had the smaller students watch the ceremony. The plan is to work with those students as well when they’re ready, so it’s definitely something that if the students continue wanting it, and continue being hungry for the information and teachings, then absolutely. We’re in and we’re moving forward with it,” she said. 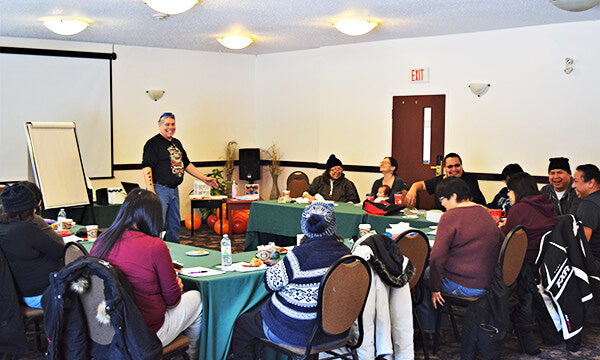 Workshop teaches the importance of laughter

It s been said that laughter is the best medicine, and participants at the Living Well Through Laughter workshop had the opportunity to learn the science of laughter and how laughter heals.