Friends and colleagues filled Sioux Lookout’s FIREFLY office to celebrate Janet Paterson’s retirement on March 4 after almost 38 years of working in children’s services with the organization.
Those in attendance had the opportunity to share memories from working with Paterson, and many touched on her dedication to child and youth mental health services in Sioux Lookout and throughout the Northwestern Ontario region.
“Janet started with Firefly in June of 1982… She started off in the infant development program, and her passion has been for the wellbeing of infants and young children.  It didn’t take very long before she became the supervisor, and her position today is the Clinical Manager of the Sioux Lookout office… She’s also looked after our other offices in Red Lake and Dryden, so she’s been very connected with the staff,” said Karen Ingebrigtson, CEO of FIREFLY.
“She’s been an incredible mentor, leader, and she’s a very humble person. She’s really made a difference, and she’s deeply involved in the community. She’s really passionate about good service for children, youth, and adults in Sioux Lookout,” she added.
Paterson said she’s enjoyed working in Sioux Lookout, and with her colleagues, over the years, and she plans to stay in the community.
“The honour to be able to work with them and also recognizing the work that we do and how that brings people together, I think it’s been really rewarding for me,” said Paterson.
“We’re not leaving. We’re staying in the community, partly that’s because we just love the environment so much,” she said.
FIREFLY’s website reads, “FIREFLY provides children’s emotional, physical, developmental and community services. As embodied in our values, FIREFLY is dedicated to supporting and strengthening the health and wellbeing of children, youth and families across Northwestern Ontario through our client‐centred service excellence, system leadership, and partnerships.” 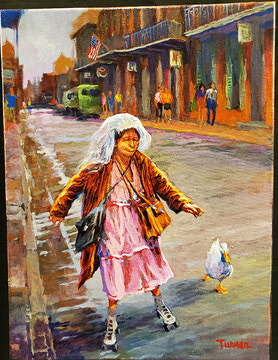 This painting, by a New Orleans artist, hangs on the wall in our hotel here in the Crescent City. I noticed it immediately after we checked in.