The community declared a state of emergency in mid-January after approximately 90 homes were declared uninhabitable due to black mould, structural issues and wiring not being up to code.

Steps outlined in the interim framework agreement, according to a statement release by Indigenous Services Canada, include, “$3,500,000 in funding to support 15 new housing units, as well as additional funding for demolition, site preparation, and shipping of materials;

$2,000,000 in funding for the delivery and installation of 10 portable housing units;

The appointment of a Project Manager and Financial Advisor to support these housing projects, as well as providing for financial literacy training and an ongoing position of Housing Manager in the community;

The completion of the winter ice road, which is necessary for vehicles to transport the materials required for repairs, renovations, and construction of homes;

The construction of a temporary warehouse structure to store materials and;

Identification of additional priority housing units for repair and replacement.”

“I thank Chief Keewaykapow for taking the time to meet with me and thank all involved for their tireless efforts to advance this crucial work together. With this interim framework agreement now in place, we will have a clear path forward to meet the needs of the community members, both in the immediate and long term,” O’Regan shared. “Chief Keewaykapow and I look forward to signing the final Memorandum of Agreement and viewing the work underway when I visit Cat Lake First Nation in the coming weeks.”

O’Regan reiterated in a video on his Twitter account on Feb. 21, “We came to an agreement on 57 housing units, 21 of those are repair and renovation, and 36 of them are new and new portable units. We’ll work together to build a brighter future in Cat Lake.”

In that same video, Cat Lake First Nation Chief Matthew Keewaykapow thanked the Minister, commenting, “Today was a ground-breaking day for us and I’m glad to see we’re moving forward in a positive direction.”

Nishnawbe Aski Nation Grand Chief Alvin Fiddler also shared on Twitter on Feb. 21, “Today is a great start to bettering the lives of Cat Lake First Nation members. I commend Chief Matthew Keewaykabo and Council and @SeamusORegan & his team for their hard work to make this possible. We look forward to work starting on the ground.”

“I was very pleased that this meeting resulted in an agreement to address the housing issues in the community,” Kenora MP Bob Nault shared.

“We have a short window because of the winter road, and why we want to get this interim agreement signed off so quickly is because we’ve only got maybe a month to six weeks, and we’ve got to get that material up and everything up there, including the 10 portable houses, because we need those portables to demolish others and move families and keep going and we can’t do that without some portable units and other places to put people,” Nault added.

He further explained, “Our plan, short-term, is to get materials up the winter road, the 10 portables up the winter road, and build a major prefab storage facility to put all the materials in because we don’t want them sitting outside… the initiative is going to have a lot of moving pieces, so we’re going to be working very closely with the project manager, with the First Nation leadership, to get all these moving pieces done. And obviously our number one objective is to get the families and community members out of housing that’s jeopardizing their health.”

Nault said the aim is also to move forward with repairs as soon as possible.

He noted, “We were in the process of building units already, so there were already 11 units being built before the state of emergency, and we had already successfully completed the renovations of 10 other units… First and foremost, the most important thing is the health of the community members, the health of the young people.”

Nault further stated, “I think the other area I was really pleased to see the Chief focus on in our meetings with the Minister is that we can’t find ourselves in situations where we weren’t aware of how dramatic this situation was, where there was no maintenance of those houses over the years and some of those houses had gotten to a point where they’re going to have be demolished, which in this case are 21 that we’re going to replace.

“We’ve committed to a housing manager, paid for by the Government, to make sure that there are regular repairs and regular maintenance and regular discussions with household owners to make sure this doesn’t happen again. This can’t just happen in Cat Lake; it’s got to happen everywhere else. Mould doesn’t only occur in the First Nations, it occurs in all housing in the north and so maintenance and operations and improvements to those homes have to be an ongoing thing and so good for the Chief and Council to see that as a priority.”

On Feb 21, Kiiwetinoong MPP Sol Mamakwa released the following statement, “Today I ask Premier Doug Ford, again, to act now to address the health crisis in Cat Lake. The province has not only a moral obligation to act, but a legal obligation to act. Ontario is a signatory to Treaty 9, and the province is responsible for health in First Nations communities.

“I urge Premier Ford to send an emergency health team to investigate this crisis, and provide any temporary housing that may still be needed, as his minister Greg Rickford said would be provided. Anything less is unconscionable. This health crisis continues to send children to the hospital and put the lives of seniors and families at risk, and the community is now mourning the tragic death of Nashie Oombash.

“Oombash was just 48 when she died. She was a mother, grandmother, and wife.

“Oombash passed away in Thunder Bay after seeking treatment for pneumonia and breathing problems – problems that her doctor linked to mould in her home. Many of the homes in Cat Lake are uninhabitable due to black mould, and it has now been more than a month since the community declared a state of emergency.”

Nault agreed assistance from the Provincial Government would be welcomed.

“We want to see the Province more involved in helping First Nations succeed and so we’re looking forward to Mr. (Greg) Rickford’s concept of what that would mean. My one recommendation for the Provincial Government is to help us with all-weather roads… I think the sooner First Nations become less isolated, the better it is for everybody. Standard of living, quality of life, and obviously better for young people because they can go and participate in all sorts of activities whether its sports, or culture or arts.”

“I would like to offer my sincere condolences on the recent passing of a community member of Cat Lake First Nation. My thoughts are with you during this time of healing,” concluded Nault. “I would also like to thank those present at the meeting yesterday for their commitment and dedication to addressing the challenges faced by the community.” 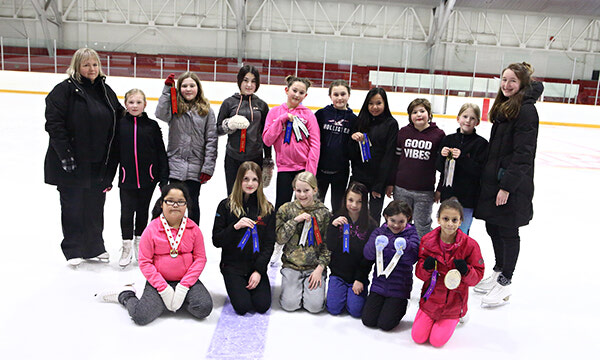 Fifteen skaters from the Sioux Lookout Skating Club earned more than 20 medals at the recent Futures Competition in Kenora on Feb. 16.