The Dryden GM Ice Dogs edged the Sioux Lookout Bombers 4-3 in a physical contest last Saturday evening at the Hangar (Sioux Lookout Memorial Arena).
The Bombers scored first with an Alex Lucas goal at 4:35, which was followed up at 18:22 by a goal from Jack Hale, to give the Bombers a 2-0 lead at the end of the first period.
Ty Lone scored for the Bombers in the second period, but the Ice Dogs answered back with goals from Easton Debray and Ben Hackl to end the second period 3-2 in favour of the Bombers.
The Ice Dogs scored twice more in the third period with two goals from Max Roby to give the Ice Dogs the 4-3 win.
Numerous penalties were called throughout the game, including 10 roughing penalties.
Bombers Head Coach Carson Johnstone commented, “They kind of goaded us into the game they wanted. They like to push and get into the crap after whistles and all the garbage that you saw and witnessed here tonight, it’s unfortunate.” He added, “For our guys that are just trying to play good hockey, it’s really, really frustrating because we’re actively telling them to stay out of scrums and stay out of this and stay out of that, but that’s what that team likes and unfortunately it’s a direct reflection of their coaching staff.”
Ice Dogs Assistant Coach Jake Gushue said, “Really proud of the boys to come back and get four unanswered and come down from a 3-0 deficit there. Couldn’t be happier with the resilience we showed tonight, so all and all we’re happy with the effort and we ended up pulling out a nice win tonight.”
Commenting on his team’s playstyle and Johnstone’s criticism, he stated, “I have nothing negative to say about the Bombers’ organization. The way they do their things and the way we do ours are obviously a little different. We like a physical style of play, and we stick to it. And you know at the end of the day we believe that’s the right way to do it and it’s okay to agree to disagree on things and you know what, they do their thing, we’ll do ours, and we wish them nothing but the best.” 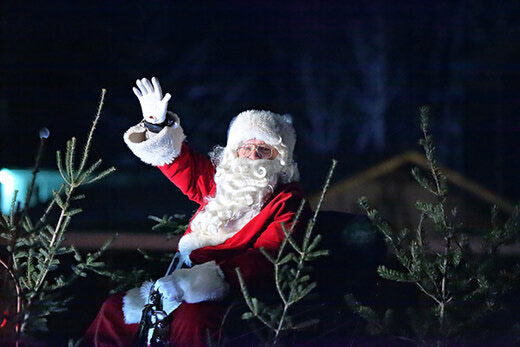 The Municipality of Sioux Lookout is presenting the Santa Claus Parade on Sunday, Dec. 11, starting at 5 p.m...