Hudson and area residents gathered at the cenotaph for Remembrance Day services on Nov. 11.
The service, organized by members of Candlish Memorial, Branch #139, Royal Canadian Legion in Hudson, was led by Master of Ceremonies Reg Drew, Medal of Military Merit (MMM), Canadian Forces Decoration (CD) and included a parade led by the colour guard, the singing of O Canada and God Save the King, the playing of the Last Post, two minutes of silence followed by Reveille, and the laying of wreaths.
A luncheon followed the service.
Legion President Bob Starratt estimated 60 people attended the service, stating, “We were quite happy with the turnout given (weather) conditions.” 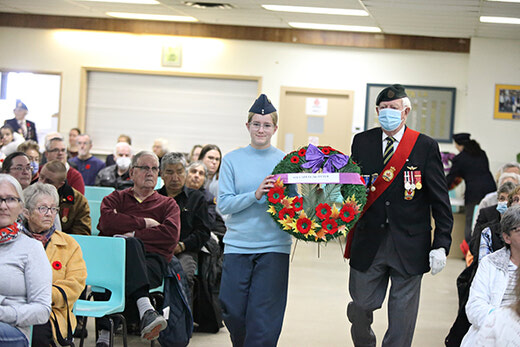 Community members gathered at the Edwin Switzer Memorial, Royal Canadian Legion, Branch 78, as well as at the cenotaph at the town beach, for Remembrance Day services in Sioux Lookout on Nov. 11...