Hub Transit, a fully accessible public transit service operating in the Municipality of Sioux Lookout with links to Lac Seul First Nation, has introduced a website to enable easier access of information for the riders. Hub Transit Board Chair John Bath said, “We thought it might be a better way to let the public know exactly what we have.” He added, “It gives us a chance to be a little closer to our customers.”

People will now be able to track the real-time location of the buses through the feature of an interactive map on their website. Bus passes can be bought at the Municipal Office or on the bus as well. Bath mentioned that while there have been several differences with COVID, Hub Transit aims to continue to better address needs, as there still exists the requirement to travel for work and shopping. The website can be accessed at www.hubtransit.org.

Bath said, “We certainly don’t have the customer count we had prior to the pandemic. But we’re still doing alright. We operated for the first six months of the pandemic with not collecting fares, but now we are.” The bus to Lac Seul First Nation and the Sioux Lookout Airport has been temporarily discontinued.

The organization is also looking to alter, and compress its routes and extend hours for an enhanced service. Bath said, “We’re doing a little bit of a rider survey to determine when riders get on the bus and where they are going. So, we can maybe modify the route a little bit to better satisfy their needs. Our aim is to pick up as many people as possible to take to work, and that’s why we’re doing this. It gives us a better idea to alter our routes a little bit to meet their needs.”

Bath said that people can request for the service on a call-in basis. He added, “We call our route a flex route. It actually has a scheduled portion to it. So, we always try to hit some of the stops at very specific times. But we will deviate from the route to pick up people who are off from our regular scheduled route.” Hub Transit charges $4 for one-way fare, with a return included for $6. People can also buy a 20-ride pass for $58, amounting to $2.90 per ride.

Hub Transit owns three buses, while usually running only two of them, with a capacity of 10 passengers each. One bus is used for local traffic and the other is for the routes to Lac Seul First Nation and the airport, with the third being a spare bus. The third bus is used as a charter when there is an opportunity. With an extra bus during the pandemic, Hub Transit has assigned a bus specifically for medical transfers, to assist people from the Extended Care Unit to the hospital and other assistances.

According to Hub Transit’s website, it is operated by Sioux Lookout Handi Transit, a not-for-profit association with charitable status. Hub Transit aims to provide safe, affordable, accessible transportation to all residents and visitors.

The organization has also recently found its new parking spot at 35 Front Street. Prior to this, they leased space at a warehouse in town, which was recently sold. Rob McClendon, a board member of Hub Transit made a presentation to council, requesting to use the municipal owned property that was not being utilized, as their new parking. Signing an open-ended lease with the municipality, Hub Transit hopes to be able to continue to use the space as their parking into the future. 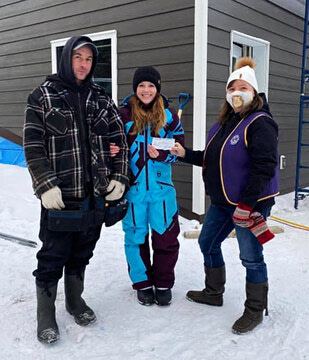 A Sioux Lookout Lions Club member, Lion Bev Piche (right), presents Ryan Perrault and Leena Thibodeau with a donation of $1000, which was pledged by the club in August when the couple lost their home to an explosion.