The Sioux Lookout Harley Owners Group (HOG) is reminding residents to keep an eye out for single headlights as motorcyclists start to hit the roads.
May is Motorcycle Safety Awareness Month in Canada, and HOG Chapter Director Rick Jaworski said both motorcyclists and drivers should retrain their brains to ensure everybody stays safe on the roads.
“It’s about retraining the brain to try and make sure you tell yourself to look out for motorcycles because it’s pretty easy to overlook. This time of year, we want to get the word out there and remind people that we’re going to be starting to show up on the highways. Being that it’s still slippery out there we’d like motorists to understand that maybe they should take it a little bit easy and keep an eye out for motorcyclists,” said Jaworski.
“We do have a catch phrase and it’s, ‘Take a sec, and double check,’ and those words are very relevant because you do have to retrain your brain to look for that single headlight. It’s so easy to overlook that you literally have to tell yourself to watch for bikers. As long as that’s in the brain it’s a lot easier to see and view motorcyclists.
“We’re off the motorcycle for 90 per cent of the year, so it’s almost like re-learning everything all over again when you get out there in the spring… It takes both the public and the riders to work together to make sure we’re as safe as possible out there,” he explained.
The Hog Chapter was scheduled to host their 16th Annual Spawning Run last weekend but, due to social distancing measures, Jaworski said they cancelled the event.
“With social distancing you can’t have more than five people anywhere so, being that we go up to Mills Creek, there’s going to be a gathering so it’s not happening this year,” he said.
In last week’s edition of The Sioux Lookout Bulletin, Sioux Lookout OPP Constable Andrea DeGagne urged drivers to keep safety a top priority on the roads, especially with the arrival of warmer weather and residents looking to enjoy activities like biking, walking, and jogging.
“The OPP is committed to maintaining the safety of Ontario’s roadways. The past few weeks have seen a reduction of traffic on our local roads, however, the arrival of springtime temperatures may change that very quickly. As the warmer weather clears up this winter’s ice and snow and COVID-19 protocols continue to keep people socially distanced, this is a good time for drivers to get out on the roads to find a change of scenery. As they head out, motorists need to keep in mind that the warm weather also brings other users to our roadways, including motorcycles, all-terrain-vehicles, cyclists, joggers, and walkers of all ages,” said DeGagne. 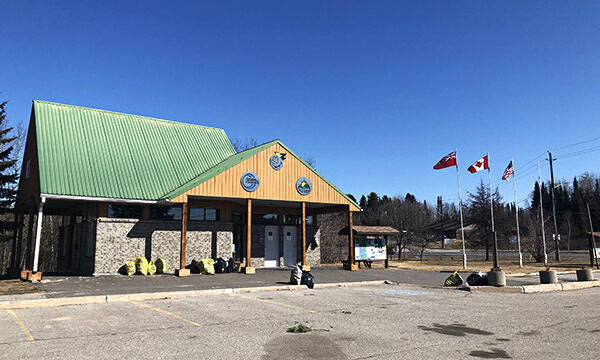 A total of 237 bags of garbage were collected through the Sioux Lookout Chamber of Commerce s Take Pride Community Wide Competition.