Historical photos, along with photos that feature local recreational opportunities, are on display in Hudson.
The photos, which have been mounted since the end of May, can be seen on the Lost Lake Drop-In Centre and directly across the street.
Hudson Advisory Committee Chair Bob Starratt shared that the photos were made and mounted by using the committee’s annual budget.
“There’s a Hudson Advisory Committee that is kind of the liaison between the residents, our councillor, and then the town council. I’ve been the chair for the last maybe three or four years, and found out maybe a few years ago that there was actually a budget of about twenty-five-hundred dollars a year for every committee of the town… So I thought we should be spending this on something in Hudson. Around two years ago, you have to spend it; you can’t save it for the next year, I ended up buying new tables and some new chairs for the Hudson Hall,” said Starratt.
“Last year, I thought, I like the pictures on the underpass here on the railway in Sioux, why don’t I do something like that? So I talked to the advisory committee members and they said go for it,” he added.
Starratt explained that he had been working with his uncle, Don Starratt, who was going to publish a book on the history of the family’s time in Hudson, which dates back to 1926.
Bob Starratt said the book came to a standstill. Last year, Don, who was 97 years old at the time, fell and broke his pelvis. He wasn’t able to leave the hospital, with the exception of day visits. He attended the annual Hudson Remembrance Day Ceremony as the last living Hudson resident that was in the Second World War. Don passed away in December, but Bob still had the photos and information from the book.
“The book wasn’t lost because I have the history, the pictures, and the captions still, so I incorporated some of that into these photos that I’ve put up on the Drop-In Centre,” said Starratt.
“I took a mix of current day photos showing the recreational opportunities. There’s a snowshoeing one, a biking one, a kayaking one, and some of the Vermillion Falls… It’s to encourage people to move there and take advantage, but also the local people to get out and take advantage a bit more,” he added.
The committee produced 50 photos, and began revealing them to the community throughout the winter before displaying them outside.
“I ended up doing 50 photos all together. Through the winter, I would put one up each week in the post office. The postmistress said every week there was lots of discussion… I’m glad that they’re being viewed, and I still have at least 20 that I haven’t put up yet as well,” he said.
Some of the photos were mounted recently on August 9 for the annual Lost Lake Drop-In Centre Blueberry Luncheon.
Starratt shared that he has some ideas on where to display more photos.
“The ones I put on the front of the (drop-in) centre, I just did that the day of the luncheon because I wanted people to see them and look at them, but I’m not going to leave them up very long because that’s all day sun-exposure pretty much… Because there’s not that many buildings, I think I’ll put some poles in beside the hall, perhaps, and string some boards across and screw them. I also thought, maybe in front of the old school, I can put some poles there and they’d be north facing as well. I’m not going to leave them up in the winter,” he said. 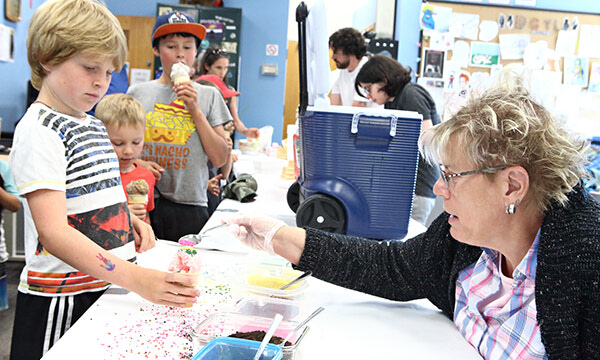 Children were treated to several flavours of ice cream and toppings at an ice cream social at the Sioux Lookout Public Library on August 7.