Historic Agreements in Principle (AIP) have been reached between the Government of Canada, the Assembly of First Nations, the First Nations Child and Family Caring Society, the Chiefs of Ontario, the Nishnawbe Aski Nation, and counsel for the Moushoom and Trout class actions.

Indigenous Services Canada, in a news release issued Jan. 4, states, in part, “The Agreements-in-Principle have been reached on a global resolution related to compensation for those harmed by discriminatory underfunding of First Nations child and family services and to achieve long-term reform of the First Nations Child and Family Services program and Jordan’s Principle, to ensure that no child faces discrimination again.”

As the release explained, “These Agreements-in-Principle provide a basis for final settlement agreements to be negotiated over the coming months. Once the final settlement agreements are reached and the necessary CHRT (Canadian Human Rights Tribunal) and Federal Court orders are made, children and families harmed by discriminatory underfunding will be compensated and measures will be implemented to better meet the needs of children, youth and families and to prevent this type of discrimination from recurring. This will chart a path for long-term reform of the First Nations Child and Family Services program and Jordan’s Principle, reducing the number of First Nations children in care, keeping children connected to their families, communities and cultures and ensuring that First Nations children have access to the services they need, when they need them.”

The release goes on to state that the Agreements in Principle will include “$20 billion in compensation for First Nations children on-reserve and in the Yukon, who were removed from their homes between April 1, 1991 and March 31, 2022, and for their parents and caregivers. This also includes compensation for those impacted by the government’s narrow definition of Jordan’s Principle between December 12, 2007 and November 2, 2017, as well as for children who did not receive or were delayed receiving an essential public service or product between April 1, 1991 and December 11, 2007. Our shared goal is to achieve a settlement that can be delivered to families as soon as possible.”

The release also describes the allotment of “Approximately $20 billion, over five years, for long-term reform of the First Nations Child and Family Services program to ensure that the discrimination found by the CHRT (Canadian Human Rights Tribunal) never repeats itself. This includes funding to support young First Nations adults aging out of the child welfare system and prevention services to build on the multi-generational cultural strengths to help children and families in staying together that will be implemented as early as April 2022. There is also new funding for on-reserve housing to support these prevention initiatives.”

Nishnawbe Aski Nation (NAN) also issued a news release on Jan. 4, in which Deputy Grand Chief Bobby Narcisse stated, in part “What has been achieved deserves to be celebrated and will strengthen our Nations’ ability to care for our children and families. While NAN welcomes this news, it must not be forgotten that many of our communities are struggling to deal with the COVID-19 pandemic. Our time and attention must be focused on providing these communities with the supports they need. The Agreement-in-Principle reached today is based on the recognition that the federal government has failed our youth and families for decades, but that Canada has partnered with First Nations and negotiated a healing path forward.  This journey of long-term reform will be First Nations led and based on our inherent jurisdiction to care for our children.”

Narcisse went on to comment “The Agreement-in-Principle (AIP) is the first stage in a two-stage process for the negotiation of a final settlement resolution scheduled to be completed by March 31, 2022.  The settlement will resolve longstanding litigation at the Canadian Human Rights Tribunal (CHRT) and related class actions. As a result of NAN’s advocacy, the AIP recognizes remoteness as a significant barrier to the delivery of child welfare services. The agreement will provide increased funding to meet actual costs of delivering care to our members in NAN communities.”

Narcisse continued, “The deal recognizes the newly formed National Assembly of Remote Communities (NARC), which has already united the voices of remote communities from Alberta, Saskatchewan, Manitoba, Northwest Territories and Ontario.  For the first time in Canadian history, a Remoteness Secretariat will be established nationally to address remoteness barriers faced by Indigenous communities across the country.”

Speaking of the AIP, Sol Mamakwa, MPP for Kiiwetinoong, expressed some tentative optimism, stating, “I think first off that I’m very encouraged that they have signed that agreement, but what’s unfortunate, though, is that they had to go to court in order to do that. I think it’s not going to fix things right away; it’s going to take some time. As a First Nations person, a person that grew up on a reserve and doing the work that I do now, you see how First Nations are treated, how systemically imbedded that oppression, that colonialism, that racism, that discrimination is. We live it on a daily basis. This is a step towards acknowledging that, The AIP is a non-binding agreement, but I think we at some point want to be able to get to a place where it’s a final agreement, that will address the real cost of delivering programs and services on reserves.”

Mamakwa went on to add, “When I was at Nishnawbe Aski Nation I was involved in part of it, when the discussions started happening. They talk about the remoteness quotient, but I think the real term is remoteness coefficient, whereby what is $200,000 worth (of services) in Toronto might not be the same as what you would see in Fort Severn. The costs of providing services, when we talk education, healthcare, when we talk about the child welfare system, and even the court system, the justice system… (these systems) are not broken… they are working just the way they are meant to, taking away the rights of the people to the land and resources that are up in our territory. They are working exactly the way they are designed to.”

More information on the Agreement in Principle is available on the Government of Canada’s Indigenous Services website at https://bit.ly/3zD0nqw. 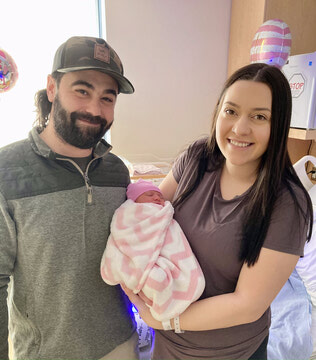 The Sioux Lookout Meno Ya Win Health Centre (SLMHC) has welcomed its first newborn of 2022.