It was a hard-fought game that went into overtime, then a shootout, but in the end the Sioux North High School Warriors Boys Hockey Team went out with a heartbreaking 5-4 loss to the Beaver Brae Secondary School Broncos in their last home game of the regular season on March 27 at the Sioux Lookout Memorial Arena.
As Austen Hoey, Head Coach of the Warriors Boys Hockey Team explained after the game, “They (Beaver Brae) have a good team there. We know they are a good team and knew we’d have a battle. Other than that, the Warriors worked hard. It wasn’t the prettiest game. We got off to a bit of a slow start, the guys were a little bit nervous just with the big crowd, but we then settled into it.”
Hoey continued, “We had some penalty issues in the middle there. That kind of cost us but we bounced back and tied it. We just couldn’t bury it in overtime unfortunately, and then the shootout, it is what it is. We play Wednesday against Red Lake, then we play Friday here, in our first playoff game.”
Scorers for the game included Liam Goodfellow from Talen Zoccole and Keenan Fontaine, Brayden Lily from Brier Edwards and Sean Cole, Henry Davis from Jaxson Carnochan and Brandon Masakayash, and Brayden Lilly from Sean Cole.
Looking back on the regular season, Hoey commented, “As for the season, we’ve been fairly happy with our group this season. Obviously, we have a pretty young squad, mainly comprised of Grade 10 and 11s, but they have all worked hard, and we have a very tight knit group. This is probably the tightest team I’ve ever coached in terms of camaraderie.”
Hoey continued, “We like to play a quick, simple game and utilize our speed in the offensive zone and try to create turnovers to capitalize on other teams’ mistakes. Everything stems from our super speedy forward group led by Liam Goodfellow, Sean Cole and Brier Edwards. On the back end, we have a really solid mix of veteran leadership and rookie spunk, Captain Kalin Roy and Assistant Captain Marek McKay play heavy minutes and we feel are among the best defensemen in the league. They are backed up by Warrior rookies, Vance Vincent,
Ethan Baas and probably our standout rookie, Jordan Fontaine who has blossomed into one of our premier shut down defensemen and a guy who I trust in virtually every situation. Between the pipes, our starting Goaltender Zac Lance has been everything we thought he was out of training camp.  Calm and steady, helping us correct any screw ups in our defense zone. Our back-up goalie, rookie Jacob Morris, has been a great positive influence in the room and on the bench. Learning and growing with every practice.”
Team Captain Kalin Roy felt his team put in a good effort, stating “It was our last home game of the season. I think we all worked hard. We had lots of chances, but we had lots of bad bounces. I probably could have stepped up a few notches there at the end, but I think we did alright. I thought we had a decent game, right down to the end.”
Hoey finished by adding “We are excited to finish off the season strong. By this point our regular season is done and we are really looking forward to making some noise in the playoffs. The playoffs are going to include every team this year.” 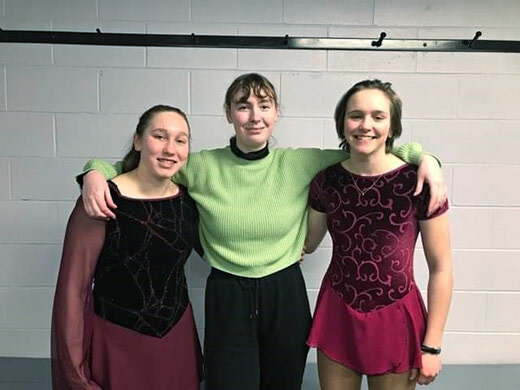 After facing a challenging year on several fronts, the Sioux Lookout Skating Club is gearing up for their end of season wrap-up. The club is having their final skate of the season on Saturday, April 9...