Sioux Lookout residents Nancy Roy and Dennis Leney are spearheading a project to replace the murals on the Sioux Lookout Legion.
Roy and Leney originally led a fundraising effort between 2005-2007 to have the murals created and put in place, along with the community clock on the Wellington Street traffic island across from Roy’s store, Roy Lane Coffee.
The murals, based on the sketches and designs of former resident Michael Alcock and painted by the late John Splawski, were installed in 2007.
The murals commemorate Sioux Lookout veterans’ contributions to the army, navy, air force and as war-time nurses and doctors.
Leney and Roy are working with Signatures Signs and Stitchery to replace the murals with restored versions.
“We’re very fortunate. We just kind of mentioned that we were doing it and we’ve gotten half of the donations already - a little bit more than half. If anybody wants to donate, they can make a donation, made out to the Legion, and make sure you stop in here (Roy Lane Coffee) and let us know who donated so we can add it to list and we’ll make a little plaque for the second time around,” Roy shared. “We have an envelope started already and we have a list of who has donated so far,” she added.
“We always felt that we needed to make sure we have a remembrance of our past, our veterans,” Leney said of he and Roy’s efforts to have the murals created, and now to replace them with restored versions.
“We felt those were getting pretty weather beaten and the town needs a little bit of a facelift around the area, so we decided to see if we can raise some funds to redo this again,” he added.
Edwin Switzer Memorial Sioux Lookout Legion, Branch #78 President Kirk Drew said he appreciates Roy’s and Leney’s efforts, “It’s a very good effort and we’re happy to help them out as best we can.”
“It’s a great project for the community to take on. You drive up there now and you see they’re all bleached out by the sun,” he concluded.
Roy and Leney are hoping restored versions of the murals can be in place for Remembrance Day. 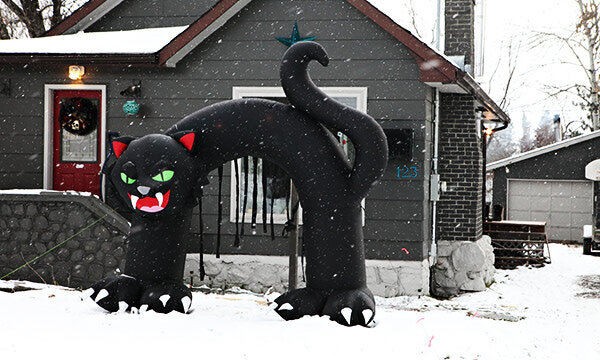 Decorating for Halloween in Sioux Lookout

Decorating for Halloween in Sioux Lookout