In Northwestern Ontario we have been fortunate with respect to the spread of the coronavirus and the number of COVID-19 cases.   Dr. Kit Young-Hoon, Medical Officer of Health for our Northwestern Health Unit, believes that several factors contribute to our low case numbers, including: our remoteness from densely populated southern areas; the minimal travel between us and those areas with higher infection rates; and our general adherence to Public Health recommendations.  Even so, as with other areas, we are experiencing an upswing in cases as the second wave of the virus spreads.  It is not yet dramatic, and our behaviour will minimize case numbers.  One number that strikes as dramatic is that two out of three of the cases in our Health Unit are under the age of forty.
The prescribed behaviours are now well known by all of us.  Perhaps the one that seems to get the most attention is the wearing of masks.  To some degree American politics has influenced our attitudes to masks.  There may also be a more deep-seated value conflict between individual freedom and the common good.  In our recent history we have some examples that may inform this current situation.
The introduction of speed limits on roads came over 100 years ago.  It was debated then and the debate continues today – although now usually not about the need for limits but what the limit should be. Arguments for increasing limits include the faster flow of goods and services to more individual-centric concerns.  Arguments for maintaining or decreasing include safety and environmental concerns.  But most of us accept speed limits and generally comply with them, within certain tolerances.  We have internalized that the limits are not only for our individual safety but are for the common good.
In the mid 1970’s when seat belt use was becoming mandatory in Ontario, many resisted this as an infringement on their personal freedom.  The case for the use of seat belts was based on data, on cost in terms of human lives, and in costs to our common health care system.  The common good out-weighed individual freedom.  The use of seat belts is now almost universally accepted by all of us in Ontario.
About fifteen years ago smoking in public spaces went from a matter of individual freedom to one of common concern when Ontario enacted smoking laws that banned smoking in various public and commercial spaces.  Over decades prior to that smoking had been recognized as a health hazard affecting both the smoker and those exposed to second-hand smoke. The ban on smoking did not eliminate the choice of an individual to smoke, but for the common good it did impose limits on where an individual can smoke. This is now widely accepted.
The public health policies regarding mask-wearing are well known.  It is not mandatory.  It is not so much for our individual benefit as it is for the benefit of those around us.  It is for the common good.  It is for the good of those in your room, your workplace, the store you are in, the team you are on.  It is especially for the good of those more vulnerable to the virus for a variety of reasons – some obvious and some private and unsaid.
As we get in our vehicles to go out in public we do up our seat belts, we drive the speed limit, and if we smoke at all we don’t smoke when we get there.  So, let’s all extend that behaviour and give up a little of our individual freedom for the common good.  Let’s comply with public health guidelines and wear a mask when we know we should.  Let’s do it for the people we are with when we safely get to our destination.  Let’s help keep each of them and all of us safe from the coronavirus. 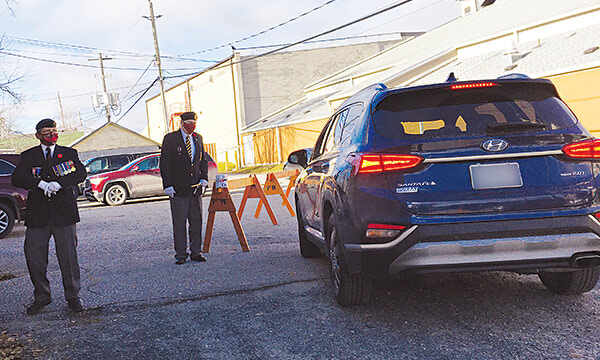 Beef on a bun Legion fundraiser a sellout

Thanks to the support of the community, a beef on a bun fundraiser for the Edwin Switzer Memorial Legion Branch 78 on Remembrance Day sold out early.
Following the Remembrance Day service in Sioux Lookout each year, members of the Legion Ladies...