Good people have been doing good things for many, many years in Sioux Lookout.  When it comes to helping vulnerable people, this is certainly the case.  Early last year a group of concerned citizens and agencies came together through the good efforts of Sioux Lookout OPP to form an ad hoc committee called the Cold Weather Committee.  The concern was for the safety of people in Sioux Lookout whose lifestyle puts them in personal danger from the elements in winter months.  This informal committee started with those already engaged in efforts and grew to include anyone who wanted to come and help.  Many came including representatives from OPP, Municipality, KDSB, First Step Women’s Shelter, Friendship Centre, Out of the Cold Shelter, Chamber of Commerce, Equay-wuk Womens Group, Northwestern Health Unit, IFNA, Youth Probation Office, Makwa Clan, MPP Sol Mamakwa, Sioux Lookout First Nations Health Authority, and more.
After many meetings sufficient funding for operations this winter was secured through KDSB.  Top up funding was provided by several other agencies.  Lease arrangements were made for the Cold Weather Drop-In Centre on Front Street.  The Centre opened in late November with facility space and staffing to operate 7 days per week 9am to 5pm.  The funding and lease space expire on March 31st.  Members of the group are actively working to secure more funding and a new space.
In the few short months since the Centre has been open, it has provided a venue for people to stay warm, socialize, play cards and board games, connect to wifi, have a cup of coffee and a bowl of soup.  We have learned a lot since the opening:
The community is generous - there have been many donations through businesses and individuals.
Finding staff has been relatively easy as there are many people who want to do this type of work.
Staff are dedicated, supportive, and compassionate.
There is a great need for this in our community – over 100 unique individuals drop in on a daily basis, many multiple times.
There is food insecurity in our community not only for those suffering through homelessness, but also for those in housing who have insufficient income. (Approximately 300 bowls of soup are served daily.)
The visitors to the Centre are truly appreciative of the facility and services provided.
The Centre has provided a reliable connection point between other service providers and those seeking and requiring services.
The visitors to the Centre each has a unique story, but there are some common themes.  Those themes generally come back to a multi-generational legacy from policies and practices related to Indigenous People and First Nations that are now recognized as disastrous.
Location is key for a facility such as this to succeed.  It must be near the downtown core otherwise it will have limited use.
The Zoning By-Law in the downtown is quite broad in permitted uses and allows for drop-in centres.
Agencies can come together and do incredibly effective work very quickly.  There were many agencies and individuals involved in this.  It couldn’t have been possible without funding from KDSB.   It would not have started without work by the OPP.  It would not have happened without the tremendous dedication of the leadership and staff at the First Step Women’s Shelter and the Nishnawbe-Gamik Friendship Centre.
The lease expires at the end of March.  The Municipality is working in conjunction with KDSB to fund a new 24/7 full-service emergency shelter and service hub.  However, in the short term we must find a way to keep a Drop-In Centre going.  Several agencies are working hard to find another location and secure funding to keep this service going.  Meetings with key partners and perhaps some new agencies will be held to work out steps to move forward and keep this successful service going in a new venue but in the downtown core somewhere.  In a small way this service helps marginalized individuals to live with a bit more dignity and the community as a whole to say “we are trying”.  Congratulations to all those of generous spirit who have contributed to the success of this venture. 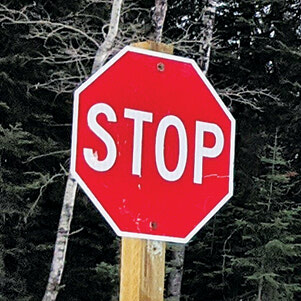 A traffic incident at the entrance of Cedar Bay has resulted in the installation of a new temporary stop sign as vehicles exit the Cedar Bay parking lot.