Sioux Lookout water meets Ontario Ministry of Environment regulations and does not have levels of trihalomethanes (THMs) exceeding 100 parts per billion (ppb) as reported three times in a Thunder Bay paper in February.

Although the money has been allocated since the spring of 2000, the first tangible sign that the Sioux Lookout OPP will get a new building appeared in a Thunder Bay paper on Feb. 14.

Pelican Falls student links-up with students from around the world

Leona Kakepetum felt weird the first time she saw her picture on the Internet. The 17-year-old grade 12 student at Pelican Falls High School is one of 12 Canadian kids selected to participate in the World Linkup Project spearheaded by the Australian Broadcasting Corporation.

It was a day of celebration as people came out to watch the grand opening of the Frontier Bookstore last Friday in their new location at 56 Front street. From left – Brenda Dovick, Monika Orzechowska, Alina Hall and Mayor John McDonald cutting the ribbon. 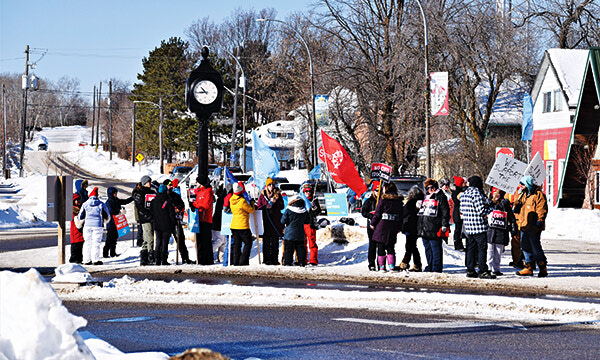 Ontario s four largest education unions held a province-wide strike on Feb. 21, shutting down the public education system and resulting in over two million students across Ontario being out of class.