Former Sioux North High School Warriors Cortez Favot, Ben Forbes, and Kendall Schulz made their Dryden GM Ice Dogs debut when the Ice Dogs hosted the Red Lake Miners for their season-opening game on Sept. 21.
After the Ice Dogs jumped out to take a 3-1 lead, the Miners scored three unanswered goals to win the back-and-forth battle 4-3.
The two teams were originally scheduled to open the season with back-to-back games starting on Sept. 20 in Red Lake but, due to a power outage in Red Lake, the Sept. 20 game was postponed.
The Ice Dogs home-opener also became their season-opener, which meant the former Warriors were making their junior hockey debut close to home.
There was plenty of support from Sioux Lookout in attendance. Both the players and parents shared that, despite the final score, it was a dream come true.
“Seeing all the Sioux support, seeing so many people that I recognize in the stands, and having the support from our town coming to Dryden to support us felt amazing. Playing alongside two of my best friends feels amazing as well,” said Schulz.
“It felt great. It’s what you dream about, always playing in front of your home crowd your whole life. We didn’t come out with the win tonight, but we’re looking to keep competing. Next weekend we’re looking to come out strong and get the win,” said Favot.
“It felt good to put the jersey on and to start. I was surprised I was starting, but I didn’t play the way I wanted to tonight. It’s still unreal getting the support from Sioux (Lookout) and getting to know Dryden better, so hopefully we go through the season, start winning some more, and playing harder… Hopefully, throughout the season, I can keep getting better and better,” said Forbes.
“There was easily a hundred people there from Sioux Lookout. I’m sure of it… The support from the hockey fan base, throughout these kids’ high school careers, has been incredible. The fact that they’re following through, driving to Dryden, supporting these kids, and now supporting a Dryden team… it’s pretty special,” said Steven Forbes, Ben’s father.
“His parents, his mother and I, couldn’t have been prouder. To see your kid out there in a junior hockey game after a pretty stellar high school career, with two of his good buddies who he won a couple championships with in high school, is a very proud moment for hockey parents for sure,” he added.
“It was nice to be a fan. It was the first time being a fan while getting to watch them play. I thought they competed really hard. Seeing all the people from Sioux Lookout was really motivating, I think, for them. I thought all three of them did fantastic for their first game. I think you’ll see them on the ice more in future games,” said Karl Schulz, Kendall’s father.
Both Favot and Kendall Schulz were line mates the entire night and, at times throughout the game, all three former Warriors found themselves in familiar territory while sharing the ice together again. The players agreed that they felt a sense of comfort and familiarity, while reigniting chemistry.
“I think we worked well tonight. We had it in the offensive zone, we were dominant, and we got pucks out in the defensive zone… I was glad to play with him (Favot) tonight,” said Schulz.
“I think we did quite well for ourselves, considering it was our first ever junior game… All-in-all, I think the Sioux guys brought it, and I hope we do it every game,” he said.
“We’ve been playing since we were kids. It’s good to still be playing with him (Schulz), and we’re looking to put up some points this year,” said Favot.
“We’re hoping to stick together the whole year and do what we’ve always done. Get goals, work hard, compete, and bring the best game we can,” he added.
“I was a lot more comfortable. It felt great seeing the guys out there. I’ve been playing with them since Atom, so it feels amazing to see them in the same colours as me,” said Forbes.
“The chemistry was definitely there. It’s cool because they’ve played together since they were little and you imagine, when they’re little, what are they going to be like when they’re older. You can definitely tell out there that they’ve always played together. They’re familiar with each other,” said Karl Schulz.
The trio return to the ice on Sept. 27 when Dryden travels to Fort Frances to take on the Lakers at 7:30 p.m.
The Ice Dogs return home on Sept. 28 to take on the Lakers in the second half of their home-and-home at 7:30 p.m.
The Ice Dogs are also hosting the Wisconsin Lumberjacks on Sept. 29 at 3:30 p.m. 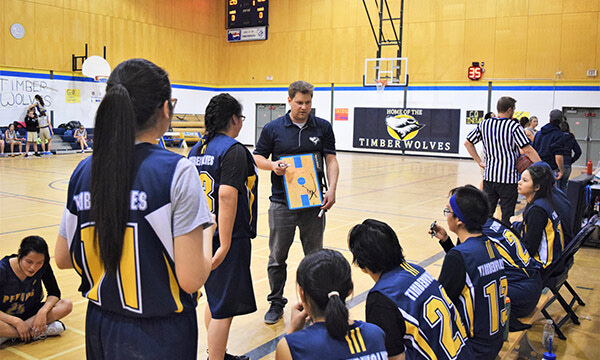 Pelican Falls First Nations High School (PFFNHS) is gearing up for another year of sports at the school.