First Nation Organizations join with Police Services to launch Am I Missing? campaign

First Nations organizations joined with police services to launch the Am I Missing? campaign in Sioux Lookout during a virtual event held on January 13. The campaign attempts to guide people to report missing persons and dispel common myths of the process.

Executive Director of Northern Nishnawbe Education Council (NNEC), Norma Kejick said, “The Am I Missing? campaign is to raise awareness about the misconceptions that you must wait 24 or 48 hours before you contact the police. We know that if you have a loved one that is missing, you don’t want to wait, there’s no time to wait, every second counts when you’re looking for somebody you believe is missing.”

First launched in Thunder Bay in 2018, Kejick explained that the Am I Missing? campaign was developed in response to Recommendation 91 from the Seven Youth Inquest, which examined the circumstances into the deaths of Jethro Anderson, Curran Strang, Paul Panacheese, Robyn Harper, Reggie Bushie, Kyle Morrisseau and Jordan Wabasse. The inquest into the deaths of these seven First Nations youth began on October 5, 2015, and ended on June 28, 2016 when the jury gave its verdict. There were a total of 115 recommendations that authorities are diligently working to fulfill.

Kejick said, “We act as their parents when they’re out for school and when we suspect that a student is missing, we haven’t heard from them, we can’t wait 24 hours. Every minute is crucial in locating a student when they’re in a city or town that they are not familiar with.”

Assess the risk: Is there a reason to believe the missing person could be in danger? If you aren’t certain, it’s best to trust your instinct.

Sioux Lookout Ontario Provincial Police Detachment Commander Dayna Wellock, shared, “It is the mission of the Ontario Provincial Police to serve our province by protecting its citizens. In order to protect the most vulnerable, we need to ensure that the public can identify if someone is missing and in danger, and then know how to take the appropriate steps to report to police. In missing persons investigations, the first few hours are critical. Partnering with Nishnawbe Aski Nation, Northern Nishnawbe Education Council (NNEC), and organizations and other police agencies in promoting the Am I Missing? Campaign is an important step to getting this information out to the community.” 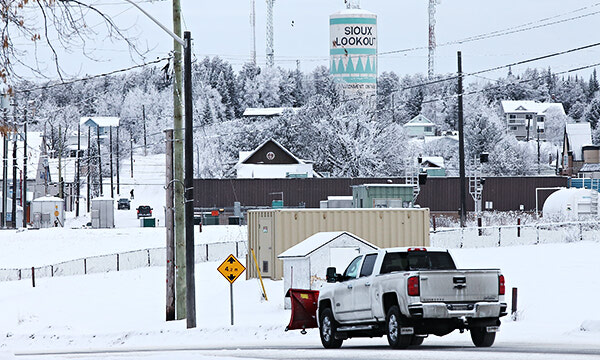 Frost and snow this past weekend have blanketed Sioux Lookout in white, creating majestic photo opportunities for those out for a bit of exercise.