Some dads spent their Father’s Day out on the lakes with their child or grandchild participating in this year’s Junior Walleye Championship on June 16.
Twenty-one teams took to the lakes to participate in this year’s tournament. The event was sponsored by Morgan Fuels and run by Sioux Lookout Anglers and Hunters volunteers.
In the 10 and under division, taking first place, with a weight of 8.18 pounds, was the team of Reese Sitar and Brendan Sitar.
Second was the team of Gabi Griffiths-Wigg and Keith Wigg.
The team recorded a total weight of 8.07 pounds.
Coming in third, with a weight of 7.30 pounds, was the team of Cooper and Derrick Sawdo.
In the 11-17 division, with a total weight of 8.55 pounds, the first place trophy was awarded to Tyler and Bryson Baker.
In second place, with a weight of 7.04 pounds, was the team of Cooper and Kevin LaBelle.
Taking home third prize, with a weight of 6.83 pounds, was the team of Hunter Atwood and Niels Madsen.
Participants in this year’s tournament said they had a fun day out on the lakes.
“It was fun… the best part was hanging out with dad,” said Gabi Griffiths-Wigg.
“It was pretty fun. I didn’t expect to win because last year I didn’t even place. It feels amazing to get the trophy,” said Reese Sitar.
“It was a good day. It was awesome getting a trophy, and my favourite part was catching the fish,” said Cooper LaBelle.
Junior Walleye tournament sponsor Darrell Morgan said he enjoys seeing the kids’ reactions when they return to the dock and bring their fish to get weighed.
“It makes it all worthwhile. That’s what it’s all about, it’s to get the kids out and get them on the water. Hopefully they get to enjoy fishing, and carry on the tradition,” said Morgan.
“It was awesome seeing everybody out on the water, the good weather, and everybody enjoyed it,” he added. 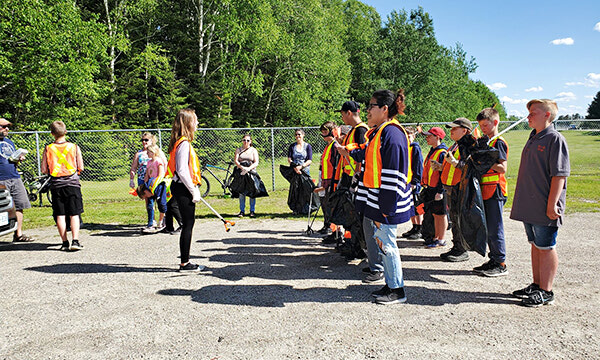 Tonight (June 13) the Royal Canadian Air Cadet 270 Otter Squadron participated in our Adopt A Highway cleanup for our section of road. We cleaned both sides (of Highway 72) from the MNRF fire base to Drayton Road...