Fall brings the return of the Sioux Hudson Entertainment Series

This season’s Sioux Hudson Entertainment Series is having its first show of the season and it’s going to look a bit different than year’s past. With COVID restrictions in place, the team behind the series had to find ways to continue to provide “big city performing arts to the remote north” while affording the public safe access to live entertainment.

Sioux Hudson Entertainment Series Treasurer Bob Johnston commented that there will be no season’s tickets sales due to the fact that the series is only able to plan one show at a time, and there is some uncertainty as to how many shows they will be able to host this year. In order to attend, people will need to buy tickets in advance, as no tickets will be available at the door. In addition, tickets will need to be purchased in groups of four to facilitate entrance to the event in “pods” of four people each. As per government regulations, proof of second vaccination will be required, either as a paper copy or digitally. All attendees will also be required to wear masks.

The first show of the season takes place on Wednesday September 22 at St. Andrew’s United Church when the series hosts Lynn Hanson, a Canadian singer-songwriter based out of Ottawa Ontario. Hanson was the winner of the 2010  Colleen Peterson Songwriting Award for her song Rest of My Days. Doors open at 7:30 p.m.

For more information on this event or details on attending, people are encouraged to visit Siouxhudsonentertainmentseries.ca or search Sioux Hudson Entertainment Series on Facebook. 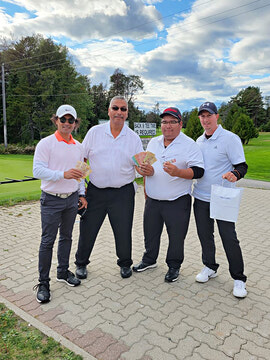 Teams split title of champ at SLGCC’s annual Shoot Out

The Sioux Lookout Golf and Curling Club (SLGCC) held their last club run tournament of the season on September 11, their annual Shoot Out...