A Facebook post on the Sioux Lookout & Area Events & Services page last week encouraging people to show their appreciation for the members of their community had received more than 200 comments as of Sunday evening.
Sioux Lookout resident Nancy McCord, an administrator for the page, said when a new profile tried to post on the page about a $1000 Appreciation Giveaway, she was skeptical.
After being provided with personal details about her family that could not be found on her Facebook page, and being sent the money by a friend of the person who had organized the $1000 Appreciation Giveaway, she became convinced the $1000 Appreciation Giveaway was genuine, sharing that in the post.
To participate, all people had to do was nominate someone outside their household, stating on the post why they appreciated that person. The person being nominated had to live in Sioux Lookout or Hudson.
“It has really been fun being the middle person,” McCord said. “There’s been a lot of comments and lots of worthy nominations. It’s been fun just to hear how much people appreciate each other. It’s something that we need right now, I think. It’s been a lot of fun reading them and learning a little bit about people,” she said.
“It’s been amazing,” she added. “It’s been uplifting so many people, including myself. With COVID and all the stress that that brings, it’s nice that everybody is taking a few minutes to recognize each other and their peers. I just love the idea of it all, taking a few minutes and recognizing each other.”
Many people shared in the post and follow-up post announcing the winners, that they too had been uplifted by the initiative.
The person behind the $1000 Appreciation Giveaway, a Sioux Lookout resident who wished to remain anonymous, contacted McCord and The Bulletin using the email identity Fluffy Bunny; signing their correspondence using the alias J. Peterman, the name of a character on the show Seinfeld.
The individual shared with The Bulletin via email, “An appreciation of one another builds a community and creates the confidence needed for success. Knowing that others are there to support you and having the strength to support others will inevitably manifest into community wellbeing and prosperity. I felt overwhelmingly that there was already an appreciation of one another here in Sioux Lookout, but when do you get the opportunity to collect your thoughts and openly tell someone that you appreciate them? Life is busy, we get caught up in the topic of the day and even though we want to tell them, we just don’t get the ‘right time’ to do it. I figured this would offer people the chance to selflessly express their appreciation.”
The anonymous individual further shared, “For those who are dealing with loss, a battle with health, know we are here for you as a community. We admire your strength and the courage it takes to put on a brave face when all you want to do is sit down.
“For those who make their days more about others and less about themselves, know that we see your efforts, know that you have given someone a chance at life that would not exist without you. Know that your legacy lives on in those that you saved, those that you’ve helped.
“For those who make our day better with a smile, a positive attitude, a highlight of our day, Thank you. Your energy ripples through this community and makes it alive. We appreciate your ability to pick us up when we are down, your laugh, the way you make us feel. We sleep easy at night having you are in our lives.
“As many must realize, the true gift was never the money. The gift is a chance to express our admiration for those we appreciate in this beautiful community. If you took the opportunity to post, I admire your ability to appreciate those around you. You are blessed to have these people in your life and you are blessed with your ability to appreciate the ones who surround us.”
After reading people’s posts, the anonymous individual behind the $1000 Appreciation Giveaway, has selected not one, but two nominees to receive $1000. The individual shared, “$1000 goes to Debbie and Bill Michaud and $1000 goes to Lynda Ducharme. I also want to acknowledge the unmeasurable loss experienced by a local family as the result of a house fire. I will be making a separate donation through Sioux Mountain School.” 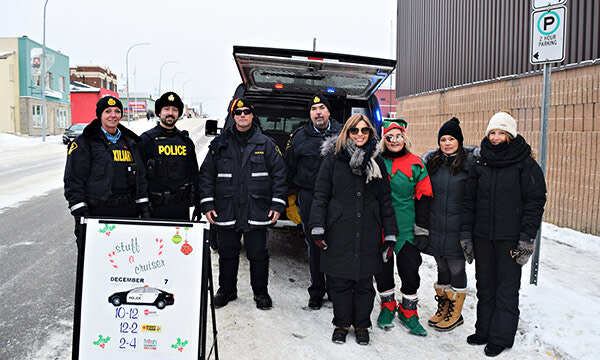