Sioux Lookout residents have experienced a wide variety of weather patterns throughout early June, including heavy rainfall, warm sunshine, and below freezing temperatures overnight.
According to Environment Canada, Sioux Lookout saw 63 per cent of its total average precipitation for the month of June last week alone.
“Month-to-month, across the year, the month that holds the average highest precipitation out of any of the months per year is June. The average rainfall in the month of June (for Sioux Lookout) is around 114 millimetres, so it’s not uncommon to have heavy rainfalls, showers, and conductive storms in the month of June. This month, in the first nine days we’ve already had 72.3 millimetres reported, so we definitely had a lot of rain the last few days,” said Peter Kimbell, Warning Preparedness Meteorologist with Environment Canada.
“In the month of June the most rainfall in one day in Sioux Lookout is 87 millimetres in 1969… 72 millimetres over a few days in June is a lot, but it certainly would not be a record,” he added.
Heavy winds and flooding rains led to severe thunderstorms warnings for Sioux Lookout last week, with tornado warnings for areas as close as Dryden. Kimbell said there were no reports of tornadoes that touched down in the area, but he confirmed wind gusts in Sioux Lookout eclipsed 60 kilometres-per-hour.
“Our severe thunderstorm warnings are issued when we are forecasting any of one of four different criteria: gusty winds at greater than 90 kilometres-per-hour, hail greater than two centimetres, flooding rains, or tornadoes. Any of those four would constitute a severe thunderstorm for which we would issue a warning… We had some tornado warnings issued and there was a bit of damage reported in Morely, but it was only minor damage. There were no tornadoes that we know of. It’s entirely possible that there were, but we don’t know because there are a lot of unpopulated remote areas,” Kimbell explained.
“On June 7 the maximum gust was 63 kilometres-per-hour, and on June 8 it was 41 kilometres-per-hour,” he said.
Despite temperatures fluctuating all the way down to zero in June, Kimbell said Sioux Lookout is only less than two degrees below the average temperature
for the month.
“So far in the month of June the mean temperature is 14.5 (degrees Celsius) and the average mean temperature for the month of June is 16. The month is still only one-third through so that could change, and 14.5 to 16 is in the ball park so it’s not too far from normal,” he said.
“For Sioux Lookout, on the 10 of June for example, the coldest temperature recorded is zero in 1972, so we’ve seen these kinds of cold temperatures before but we don’t necessarily get it every year,” he concluded. 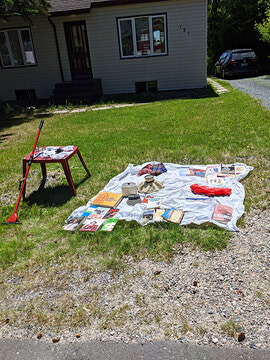 Sioux Lookout and area residents enjoyed another full weekend of Curbside Swapping last week. The event, which typically occurs once a month in the spring, summer, and early fall, will become a more frequent staple this year.