Escape Sioux, which is an escape room and trivia experience entity in Sioux Lookout, used proceeds from their recent escape rooms to donate a platinum plaque towards Sioux Lookout’s dog park fundraising effort.

The recent escape rooms, which were hosted at The Bark Barn pet store on Front Street from Feb. 1 until March 2, saw 38 groups and over 150 players test their luck at escaping the room within the 45 minute time limit. There was a 40 per cent escape rate.

When asked about the partnership between Escape Sioux and The Bark Barn, which made the recent escape room experiences possible, the two had nothing but good things to say about each other.

“This was a great partnership between us and The Bark Barn because The Bark Barn is our only pet store in town and has a special service that it offers the people of Sioux Lookout. The unique part is we (Sioux Lookout) have an animal shelter, we’re trying to build a dog park, and we also have a pet store, so I was trying to put those pieces together,” said Escape Sioux founder Marc-Nicholas Martin-Paulichenko.

“The Bark Barn was very accommodating in offering their space to us to allow this Escape Room to happen. What we did was an exchange of service, so they let us use the space and we helped promote their business, which also helped promote the dog park… It was a great opportunity to bring those pieces together and really promote awareness as to what can be done in this town. Our business model is very much around working together with other businesses. We try to work together in a way that benefits the community,” he continued.

“It was absolutely fantastic. It really was. Those guys that run it work very, very hard, but they’re so creative. They had very limited space with us and they pulled off an incredible feat. It really was amazing,” said Bark Barn representative Erin Miles.

“There was no issues whatsoever with these guys. We were able to bring in, because of them, new clientele for us, so it was like a win-win. There were people that had never been in our store before and they had the opportunity to come in and see it.”

The Municipality of Sioux Lookout shared that, to date, the dog park fundraiser has raised $1470.72 in efforts to reach the total goal of $15,000 to build permanent fencing. The platinum plaque will see, additionally, at least $150 go towards the fundraising effort.

“It touched our hearts. They’re really amazing people… The money going towards the dog park is phenomenal because this community really needs something like that and for them to put their hard-earned money towards that, that makes it feel grateful,” said Miles.

When asked about the feedback they’re hearing from participants, Escape Sioux shared that the town is eager for more of what they have to offer.

“The typical feedback has been great. People are really positive and have a lot of fun. People are often asking when our next escape room is and what we’re doing next. It’s been great.” said Escape Sioux games master Tyler Wills.

Martin-Paulichenko explained that, alongside Wills, Escape Sioux is looking to branch out and host more events that are fun, affordable, and available for the entire family.

“Tyler and I are putting our heads together as to what we can do in the future. One of the things we have planned is we are planning to do a movie night in Sioux Lookout where we will sell popcorn and have a movie in a space where we can bring people together… The whole purpose behind that is to create opportunities for families because a lot of stuff we do right now is for adults and young adults so this would be an opportunity to reach the younger demographic as well as parents who can bring their kids to something that’s fun and gets them out of the house.”

“People approach our trivia masters, Tia Hoey and Jamie Poling, and they ask us if we can make a donation from the proceeds to their group, so we’ve donated to the Sioux Lookout Community Gay-Straight Alliance (GSA) and, most recently, we’ve donated to the Sioux Mountain Public School grade seven and eight trip. We donated $800, with 150 of that coming from the first place team donating their proceeds to the benefits as well… Moving forward, we want to do events in this town that not just are fun and adventurous, but we also want to give back to the community,” Martin-Paulichenko explained.

The next trivia night will be on March 16 at the Sioux Lookout Legion. The trivia night starts at 8 p.m. and will feature a St. Patrick’s Day theme. Proceeds will be going towards the Sioux North High School Warriors boys’ hockey team as they continue their fundraising efforts to support the costs associated with their trip to the OFSAA tournament in Kincardine, Ontario from March 19-21.

Moving forward, Escape Sioux is looking to continue partnering with businesses and people in Sioux Lookout to help bring exciting and adventurous fun to the community, all while continuing to support different community needs.

“We don’t have a location, that’s something we’re working on, but right now we’re looking for businesses and people to partner with us just to bring things to Sioux Lookout. For example, the pet store here, Bark Barn, has been very generous in giving us their space because they want things to do in Sioux Lookout. They were excited to do this and were very accommodating. We want to work with people to help the community. If we make a few bucks that’s great, but we’re going to try and give it back as well,” Martin-Paulichenko concluded. 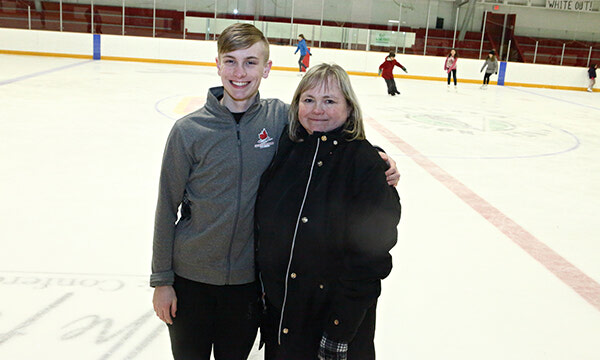 The Sioux Lookout Skating Club can proudly boast of having one of the best male skaters in the province among its ranks.