Eric Melillo is heading back to Ottawa to represent the Kenora riding as its Member of Parliament.

The Conservative candidate in the Sept. 20 federal election was re-elected with 11,103 votes, according to Elections Canada.

With 45,500 people in the Kenora riding eligible to vote, 26,201 votes were recorded with 118 ballots being rejected.

“It’s an honour to be re-elected and once again serve our region in parliament,” Melillo shared.

“I’m excited to get to work. A bit of a disappointment from the national results that we won’t form the next government, but Conservatives once again won the most votes and we picked seats up in some very key areas, so I think we have great things ahead of us and I’m very optimistic about the future of our party,” he added.

“With this election right in the middle of the fourth [COVID-19] wave I think that it’s important that when we get back we’re focusing on our recovery from COVID-19 and supporting our small businesses that have been impacted, the tourist outfitters, and really the industries across our region to help secure jobs and ensure we’re getting things back on track and rebuilding in our post-pandemic world as COVID is hopefully something that we’re moving away from,” he said.

“I appreciated knocking on around 10,000 doors I think, in the riding. Getting a lot of help from my team of volunteers as well, so we got to chat with a lot of folks, the forums were great opportunities to engage with people from across the region…I’m looking forward to taking the concerns I heard with me to Ottawa to ensure we’re advocating for the region and working to deliver results,” Melillo shared.

He thanked his fellow candidates for putting their names forward to represent the riding, “It’s a very honourable thing to run for office, to want to serve the region. I appreciated that all the campaigns were very positive, and we definitely disagreed and had passionate disagreements at times, but it was always positive, and I appreciated the campaigns that all the candidates ran.”

Seymour commented, “From the moment that the election was called to the second we knew who had won the races, nationally and locally, I barely sat down. The mental focus and the physical and emotional energy required to run a campaign are beyond comprehension unless you’ve lived it. Each day was a struggle to see what I could do to get my words out, to physically meet as many people as possible and to listen to their stories. In short, it was one of the most exhilarating experiences of my life!”

She added, “I find myself now wondering what can be done with the incredible momentum that came from the campaign: the stories, insights, hopes and fears of the people I was lucky enough to meet are still with me. Do I let that go, do I tell myself, “Well, that’s over and done with?” I can’t. While I was running for office, I repeatedly told people that I wanted to listen, that I wanted our communities to start having real dialogues, safely and respectfully. I still do.

“During the campaign, I was expecting to see significant reporting on candidates’ platforms regarding Indigenous, First Nations and Metis peoples, especially after the Residential School “discovery”. There was, sadly, very little. It seemed that the grief and horror we experienced as a Nation, were just fleeting emotions that weren’t going to lead to anything. It seemed as though we couldn’t count on keeping the memory of the Children, both in the physical world, and in the spirit world, alive.”

Seymour added, “The low voter turnout of just over 50 percent also told me that people were tired, disillusioned and frustrated with the status quo, but that’s exactly what we ended up with.

So many people think that they don’t matter, and that what they say doesn’t count. I know first-hand that people who struggle are rarely heard. But I also know, when they do share their words, the flow of thoughts and emotions that comes out is very powerful, thoughtful, and insightful. Change only happens when we share knowledge, truth-telling stories, to further the collective hopes and aspirations of this Nation. I’m determined to continue listening and sharing insights whenever and wherever I can. You can count on that.”

Martin stated, “I think it was a good campaign. We learned a lot, just starting out as a fresh candidate in this region…we definitely grew as a party in this region and look forward to continuing on that pace.”

This was Rheault’s first campaign as a candidate and he said it was an eye-opening experience, “There were a lot of people very upset about what’s been going on in the government for many years. I can hear it when I go and knock on the doors and talk to people.

“It really does go back to people are just not really listening to what’s actually happening in a lot of cases and those that are standing up against it, I think we did very well in this election considering I’m new to the area.”

He stated, “We’ve got a beautiful area here in the north and to try and save it is going to take more people to be involved, more people to actually understand what’s going on and I think people are realizing that the Green Party is an alternative because it gives a lot of voice for local people. I think we did very well our first time around, but I made a commitment to the riding of Kenora and to the people in the Kenora riding. I am coming back in the next election and I’m going to continue speaking the truth, and we need to save the planet for the next seven generations.

The Bulletin also reached out to Liberal candidate David Bruno but had not heard back from him as of the time this article went to print. 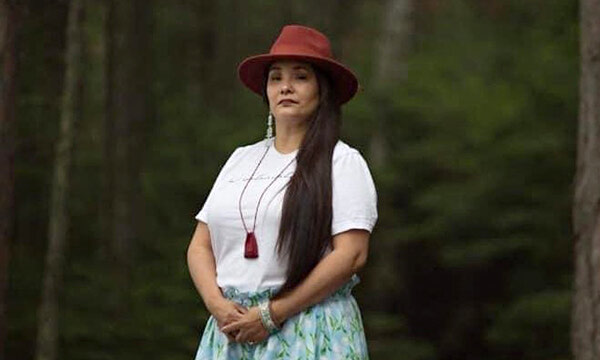 A local author is gaining recognition outside of our community after being featured on the website of ROOM Magazine. As a recent guest on ROOM Magazine s Indigenous Brilliance podcast, Crystal Harrison Collin was invited to read one of her pieces...